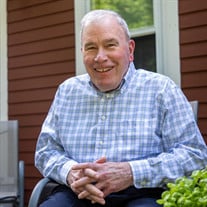 Kevin McSweeney, (son of the late John F. and Margaret (Haverty) McSweeney), of Francestown, NH, passed away peacefully on September 17, 2021, surrounded by family, after living with Alzheimer’s disease for several years. A longtime resident of Belmont, MA, Kevin was born in Boston on April 4, 1942. He proudly served in the United States Coast Guard with the rank of Boatswain’s Mate, on active duty for two years followed by the Coast Guard Reserves. Following his career in the Coast Guard, he worked for Casson Corporation for many years until the company closed, and he continued his career in the food service supply business at Harbour Food Service Equipment in Boston until his retirement. Kevin was an active volunteer, dedicating years of service as a member of the Belmont Lions Club and a Eucharistic Minister at St. Joseph’s Church. Above all, Kevin was dedicated to his family, especially his siblings and many nieces and nephews. He always had a drawer full of Andes mints waiting for the kids, along with the latest gossip and news. He was an incredible storyteller, with an amazing memory for the little details and a twinkle in his eye. A country music lover and dedicated Red Sox fan, even during the time of “the curse,” Kevin had an infectious smile and an unceasing sense of optimism for the Sox’s next season. He had a knack for connecting with people, whether over sports, celebrity gossip, or the weather. After retiring to Francestown, Kevin delighted in getting to know his community, from picking up the morning paper with neighbors at the General Store to meeting people over the recycling at the local Transfer Station. He leaves behind his three siblings; Gerald McSweeney and his wife, Barbara Faust, of Buffalo, NY; Janet McSweeney of Francestown; and Gail MacInnes and her husband, John, of Francestown. He is also survived by his nieces, nephews, and grand-nieces and -nephews: Sean McSweeney and his wife, Nicole, and their four children, Patrick, Connor, Kieran, and Maeve, of Toronto, Ontario; Jacob McSweeney of Toronto, Ontario; Kevin Holdredge and his wife, Beth, and their three children, Eric, Sarah, and Ethan, of Francestown; Christopher Holdredge and his wife, Heather, and their two children, Cate and Ryan, of Falmouth, ME; Jonathan Holdredge and his wife, Mariel, of Francestown; Stephen MacInnes, and his fiancée, Stephanie Peters, of New Durham, NH; Megan MacInnes, and her husband Brandon Fleischer, of Beacon, NY; and Christina Neuner and her husband, Paul, and their three children, Molly, Max, and Nora, of Portland, ME. A Memorial Service and Celebration of Life will be held at a future date in Francestown. In lieu of flowers, the family suggests donations be made in his name to the Alzheimer’s Association at www.alz.org , 68 Hours of Hunger at www.end68hoursofhunger.org or the National Audubon Society at www.audubon.org

The family of Kevin McSweeney created this Life Tributes page to make it easy to share your memories.