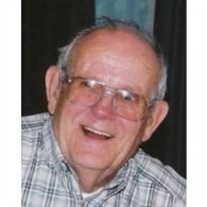 Kevin McKeating, Sr., 88 of Hudson, died Wednesday January 25, 2012 at St. Joseph Hospital in Nashua. He was born March 16, 1923 in Northbridge, MA, son of the late Patrick and Anne (Dalton) McKeating. He was also predeceased by two sisters, Patricia and Una. Kevin was the husband of Neva (Grant) McKeating of Hudson. He was a World War II Navy Veteran, a member of the American Legion Post 48 Hudson, a 4th Degree Knight of Columbus, and a member of the Hudson Seniors. Kevin retired from Teledyne in Hudson in 1988 as a tool and die maker. Besides his loving wife Neva, survivors include two sons Kevin McKeating, Jr. and his wife Remy of Nashua, Robert McKeating of Woonsocket, RI, two daughters Kathie Demers of Hudson, Carmel Monaco and her husband Kevin of Brookline, NH, ten grandchildren, ten great grandchildren, and many nieces, nephews, and cousins. Visiting Hours will be held on Friday January 27th from 4pm-7pm in THE DUMONT-SULLIVAN FUNERAL HOME 50 FERRY ST IN HUDSON. A Funeral Mass will be celebrated on Saturday January 28th at 10:30am in St. Kathryn Church, 4 Dracut Rd. in Hudson. ALL MAY MEET AT CHURCH. Burial will be in St. Patrick Cemetery in Hudson.

The family of Kevin McKeating created this Life Tributes page to make it easy to share your memories.