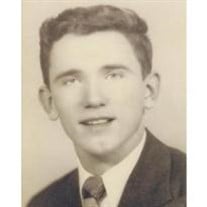 Kenneth B. Lee of Hudson and formerly of Lowell, MA died peacefully with loved ones present on Saturday July 2, 2011. He was born on January 16, 1931 in Nashua, the last child of the late George and Octavie (Maynard) Lee. Ken was predeceased by four brothers Raymond, Roger, Roland, and Norman, as well as by one sister Mildred. His former wife of 54 years, Mariette (Tessier) died in December of 2006. Ken was educated in Nashua and graduated from the former Sacred Heart School in 1945 and later from Nashua High School in 1948. In March of 1951, at the height of the Korean War, he enlisted in the United States Air Force as a Flight Engineer. He later attended St. Anselm’s College and Merrimack College. Ken worked for Raytheon in Hooksett, NH, Sanders Assoc. in Nashua, and later retired from Kalwall Corp. after being employed there for 29 years. Ken was a total sports enthusiast, but his #1 passion was baseball. He played it, coached it, and later umpired. He volunteered for the Nashua Babe Ruth Program and coached both the Nashua Red Sox and the Nashua Indians for many years. His Indians team rewarded his efforts by winning back to back city titles in his final two years. A special thanks goes to both Dr. Robert Yager and Dr. Naim Aoun and their superb staffs as well as to the Lowell VNA and Hospice services for their expert medical care. Survivors include a son Michael Lee and his wife Ellen of Hudson, two daughters Kathy Lee of Richmond, VA, Maureen Huffman and her husband Kevin of Chandler, AZ, four Grandchildren Derek Lee and his wife Sarah of Derry, NH, Ryan Lee of Hudson, Taylor Douglas of Richmond, VA, Nicole Douglas and her husband Leo Matchett of L.A., CA. He also leaves six nieces, one nephew, as well as his loving and caring companion Helen McGrath of Lowell. Also, his faithful dog Sophie, who was always at his side. Visiting Hours will be held on Tues. July 5th from 6pm-8pm in the DUMONT-SULLIVAN FUNERAL HOME 50 FERRY ST. IN HUDSON. A Graveside Service will be held on Wed. July 6th at noon in St. Patrick Cemetery 75 Derry Rd in Hudson. All May Meet At The Cemetery.

Kenneth B. Lee of Hudson and formerly of Lowell, MA died peacefully with loved ones present on Saturday July 2, 2011. He was born on January 16, 1931 in Nashua, the last child of the late George and Octavie (Maynard) Lee. Ken was predeceased... View Obituary & Service Information

The family of Kenneth B. Lee created this Life Tributes page to make it easy to share your memories.

Kenneth B. Lee of Hudson and formerly of Lowell, MA died peacefully...