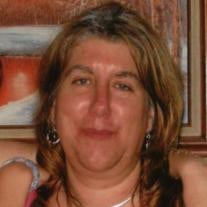 Karen Crowley, 48 of Nashua, died Tuesday December 11, 2012 at Mass General Hospital in Boston, MA following a brief illness. She was born January 6, 1964 in Medford, MA daughter of Joseph and Alice (Gravelle) DePari of North Billerica, MA. Karen was the wife of Joseph Crowley of Nashua with whom she shared 27 years of marriage. Originally from North Billerica, Karen and Joe moved to Hudson, NH in 1985 and later to Nashua. Karen loved to cook, read, and was an avid Boston Bruins fan. She will be greatly missed by all who knew her. Besides her loving husband and parents survivors include three daughters, Allyson Crowley of Londonderry, NH, Jacqueline Crowley of Nashua, Nicole Crowley of Nashua, a brother Joseph DePari of North Billerica, a mother in law and a father in law Gerald and Rosemarie Crowley of Tewksbury, MA, a sister in law Debra Hurley and her husband Brian of Tewksbury, MA, a brother in law Richard Crowley and his wife Karen of Salem, NH, as well as several nieces, nephews and cousins. Visiting Hours will be held on Sunday December 16th from 1pm-4pm in THE DUMONT-SULLIVAN FUNERAL HOME, 50 FERRY ST. IN HUDSON. A Prayer Service will be held on Monday December 17th at 11am in the funeral home. All may meet at the funeral home at 10:30am. Burial will be in Edgewood Cemetery in Nashua.

The family of Karen Crowley created this Life Tributes page to make it easy to share your memories.