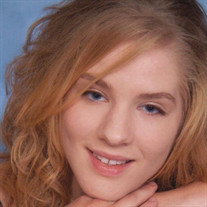 Julie Marie Cabral, 29, of Hudson, NH passed away Sunday, October 29, 2017. She was born May 8, 1988 in Nashua, NH, a daughter of Karen (Granger) Cabral and Ernest Cabral Jr.  Julie was a beautiful, courageous young woman.  She loved running and ran a full Marathon in Manchester, NH in 2012. She also had an interest in modeling and attended Barbizon Modeling School.  Julie graduated from Alvirne High School in 2006, and attended Southern New Hampshire University.  Julie loved the outdoors and enjoyed many camping adventures with her children.  She also loved going to lakes and beaches with her children.  She enjoyed spending the holidays with her family, on Thanksgiving she could out eat everyone at the table and still manage to maintain her figure. She had an infectious, bubbly personality that never failed to put a smile on your face. She was a very outgoing person with an unforgettable soul. She is survived by her two daughters; Isabella Holland, Halle Holland, two sons; Vincent Holland, Theodore DeGennaro, her mother; Karen (Granger) Cabral and her father Ernest Cabral Jr. of Hudson, brother; Keith Cabral and his wife Amanda of Nashua, NH, three sisters; Heather Cabral of Hudson, Christina Cabral of Hudson, Kaylee Cabral of Hudson, her maternal grandmother Nellie Granger of Merrimack, NH, her paternal grandmother; Christine Cabral of Hudson. She is also survived by aunts, uncles, nephews, cousins and friends. Visiting Hours will be held on Sunday November 5th from 2-5pm at the Dumont-Sullivan Funeral Home, 50 Ferry St., Hudson. A Funeral Mass will be celebrated the following morning at 10am at St. John the Evangelist Church, 27 Library St., Hudson. Burial will take place following mass in St. Patrick’s Cemetery, Hudson.

The family of Julie Marie Cabral created this Life Tributes page to make it easy to share your memories.