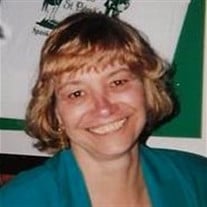 Judith “Judy” McCarthy, 67 of North Chesterfield, VA and formerly of Nashua NH, died Friday July 4, 2014 in North Chesterfield, VA. She was born March 16, 1947 in Mineola, NY daughter of the late John and Eleanor (Rennert) Carlson. Judy was predeceased by her husband, Charles McCarthy, Jr., in 1991 and later by her long time companion, Timothy Cleary. Judy was a 1982 graduate of SUNY at Old Westbury where she graduated with a Bachelors Degree in Accounting. She grew up on Long Island, NY and later moved to NH in 1984. She recently retired from NH Humanities Council following 10 years of dedicated employment as a Financial Officer. Judy held a passion for home decorating and she enjoyed gardening, crafting, reading, taking walks and attending yard sales. Judy will always be remembered for the great love she shared with her children and grandchildren. Her loving family includes two sons; Sean McCarthy and his wife Sheryl of Penacook, NH, Keith McCarthy of Gloucester, MA, a daughter; Kerry Dryden and her husband Nathan of North Chesterfield, VA, a brother; Peter Carlson and his wife Kathy Oehl of Maryland, two sisters; Barbara Betz and her husband Joe of Minnesota, Kathy Lembo and her wife Linda Powers of Florida, five grandchildren; Rebecca Dryden and Eli Dryden both of North Chesterfield, VA, Dillon McCarthy, Erin McCarthy, and Colin McCarthy all of Penacook, NH, a sister in law Joan Gossett, as well as many nieces, nephews, and cousins. Visiting hours will be held on Thursday July 10th from 10am-noon, with a Service of Remembrance beginning at noon in the DUMONT-SULLIVAN FUNERAL HOME, 50 FERRY ST., IN HUDSON. Burial will be in St. Patrick Cemetery, Hudson. Those who would like to make a donation in Judy's memory may do so by contributing to the American Cancer Society, PO Box 22718, Oklahoma City, OK, 73123.

The family of Judy McCarthy created this Life Tributes page to make it easy to share your memories.