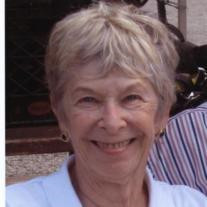 Joyce (Olander) Gardiner, 69, of Londonderry, NH died peacefully Thursday September 6, 2012 at the Elliot Hospital in Manchester, NH. She was born April 14, 1943 in Hartford CT, daughter of Helen (Hartl) Olander and the late Carl Robert Olander. Joyce was the loving wife of the late John “Jack” P. Gardiner, with whom she shared 41 loving years prior to his passing in 2006. She was a very spunky, generous and loving person. She graduated from Bloomfied High School in CT and went on to attend the University of Hartford in CT. She worked in advertising for many years and was a partner in several small businesses, most recently she was the owner of Dolphin Associates, a corporate and technical advertising and marketing company in Londonderry. In 2010, Joyce was campaign manager for Frank Emiro in the New Hampshire gubernatorial election of 2010. Joyce became a private pilot and enjoyed flying around the country with her husband, Jack, and with other family and friends. She was a First Lieutenant in the Civil Air Patrol (CAP) NH Wing. She was also a member of the NH Garden Railway Society and the Bristol S Club. She was very active in the several veterans support groups to aid and assist our U.S. Veterans, as well as being a Colonel with the Honorable Order of Kentucky Colonels, an advisor and consultant for the National Vietnam and Gulf War Veteran’s Coalition, a past Director of the NH Gold Star Mothers Memorial Statue Committee, a member of Release Foundation POW/MIA, and a Khom Nation supporter. Joyce was a faithful communicant of St. Mark the Evangelist in Londonderry and enjoyed being a member of the choir there. She loved music and singing, and sang with many choirs, and was also an avid tennis player and golfer. Besides her loving mother, Helen (Hartl) Olander, survivors include a daughter and a son in law, Theresa and Lawrence Clawson Jr., two grandsons, Glenn Clawson and Brendan Clawson all of Tyngsboro, MA. Her life partner Frank Emiro of Londonderry, a sister and brother in law Deborah Dunne and her husband Kevin of St. Augustine FL, a brother and sister in law Robert “Bob” Olander and his wife Sharyn of No. Ft. Myers, FL, a sister in law Susan Olander of Windsor, CT, a brother and sister in law, Robert and Betty Gardiner of Hawthorne, NY, a brother and sister in law, Margaret “Peg” and John Homberg of Framingham, MA. As well as two nieces and a nephew, several loving cousins and many dear friends. Visiting hours will be on Tuesday September 11th from 4pm - 7pm in the Dumont-Sullivan Funeral Home, 50 Ferry St. (Rte 111) in Hudson, NH. A Funeral Mass will be celebrated on Wednesday September 12th at 10:30 AM at St. Mark the Evangelist Church, 3 South Road, Londonderry, NH. All May Meet At Church. Burial will take place in St. Patrick Cemetery, Hudson, NH.

The family of Joyce (Olander) Gardiner created this Life Tributes page to make it easy to share your memories.