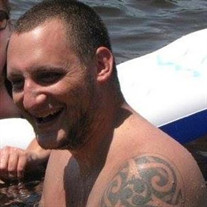 Joshua Richard Bujnowski, 32 of Hudson, NH died unexpectedly on July 13th, 2016. Josh was born on March 19th, 1984 in Nashua, NH son of Judy (Gagne) Bujnowski and the late Walter Bujnowski Jr. To know Josh was to love him. He was a long time resident of Hudson New Hampshire and having been born in Hudson he grew to love the town and the Town's people certainly loved him. He worked at True Value for many years and he connected with all customers on a personal level. He was gentle loving and kind. Josh lived his life with vitality and much love for his family his friends and all who knew him. Because of his long term residency in Hudson there were many who knew him. Josh always had a smile on his face and a giving spirit in his heart. He wanted to help everyone in any way that he could. Josh enjoyed cooking, video games (he was the master!!), his cat named "Kitty", the beaches of Maine where he often went as a child and still frequented as an adult, golf, mini golf, fireworks, Texas Hold Em, fishing, camping and was a total Big Bang Theory Fan.Josh made exquisite margarita's. Joshua always enjoyed laughter and he possessed the ability to make other's laugh even if it was at his own expense. He never was afraid to say the words "I love you" and he said those words often. Josh will be forever missed, forever loved and forever in our hearts. Besides his loving mother Judith Bujnowski of Merrimack NH, Josh is survived by two sisters, Megan Bujnowski of North Andover, MA and Kristen Buja and husband Tom of Hudson NH along with their children Brody and Ethan; beloved girlfriend Melissa Flynn of Hudson, NH; uncle and aunts Rick and Paula Gagne of Indianapolis IN, David Gagne and wife Ella of Hudson, NH Richard Bujnowski and wife Savadat of Rindge NH, Kevin Bujnowski of Hudson NH, Lisa Harrington and husband Les of Lexington, MA, David Bujnowski and wife Cathy of Hudson, NH and many cousins and dear friends. Visiting Hours will be held on Wednesday July 20th from 5-7:30pm at the Dumont-Sullivan Funeral Home, 50 Ferry St., Hudson, NH with a memorial service being held from 7:30 until 8:00pm that evening in the Funeral Home.

Joshua Richard Bujnowski, 32 of Hudson, NH died unexpectedly on July 13th, 2016. Josh was born on March 19th, 1984 in Nashua, NH son of Judy (Gagne) Bujnowski and the late Walter Bujnowski Jr. To know Josh was to love him. He was a long... View Obituary & Service Information

The family of Joshua R. Bujnowski created this Life Tributes page to make it easy to share your memories.