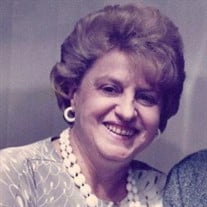 Our beloved matriarch, Josephine (Russo) Patsos, age 88, passed away peacefully during the early morning hours of June 4, 2022, surrounded by her family and an enormous amount of love and devotion. Josephine was born in Malden, MA and was the eldest daughter of the late Domenic and Mary Russo, and loving sister of the late Virginia Fusco. She graduated from Everett High School and Boston University School of Education. Josephine married Plato (Pat) Patsos in 1956 and they were inseparable until his death in 1993. She is survived and missed by her sons Michael Patsos of Hudson, NH and David Patsos of Manchester, NH; granddaughter Alaina (Patsos) Coscia of Winchester, MA, her husband Greg, and their children Michael Gregory and Francesca Josephine; and granddaughter Dr. Olivia Plato Patsos of Concord, MA. All of whom she was immensely proud and loved dearly. She is also survived by many nieces and nephews. Josephine had a long and successful career as a school teacher. She first taught in Medford, MA from 1954-1957. Then after a brief period at home raising her children, she resumed her teaching career in 1968 as a language arts teacher at Hudson Memorial School in Hudson, NH and remained there until her retirement in 2005. As an educator, Josephine was elected to the “Who’s Who Among America’s Teachers,” was a founding member of the Hudson Federation of Teachers, and in 2005 received the Hudson VFW Citizen’s Award. After retirement, she was a proud member of the NH Retired Teachers Association and remained close to her many fellow teachers and friends. There will be no calling hours and “per strict instructions from mom,” a private burial service will be held. In lieu of flowers, Josephine requested that donations be made to: Make-A-Wish Foundation, 814 Elm Street #300, Manchester, NH 03101 or online at https://wish.org/nh

Our beloved matriarch, Josephine (Russo) Patsos, age 88, passed away peacefully during the early morning hours of June 4, 2022, surrounded by her family and an enormous amount of love and devotion. Josephine was born in Malden, MA and was the... View Obituary & Service Information

The family of Josephine Patsos created this Life Tributes page to make it easy to share your memories.