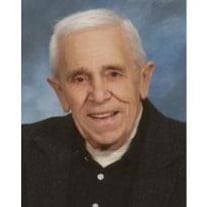 Joseph Patrick Earabino, 83 of Hudson, NH died Saturday March 6, 2010 at the Southern NH Medical Center in Nashua surrounded by his loving family. He was born November 1, 1926 in Beverly, MA son of the late Patrick and Mary (Tanzella) Earabino. Joseph was the husband of the late Anastasia (Cavanaugh) Earabino who died in September of 1998. He was also predeceased by a brother; Richard Earabino. At age 17, Joe joined the Navy and later attended Brown University. While there he earned a degree in electrical engineering and enjoyed playing lacrosse. At one time he was employed with NECCO and later was employed with General Electric (GE). After leaving GE, he co-founded a company in Portsmouth, RI called IMS. He retired from IMS after dedicating nearly 20 years there. Following his wife Anastasia’s passing, Joe became devoted to volunteering and charity work. He felt so passionate about it that he travelled to the Marshall Islands as an emissary from St. Kathryn’s Parish in Hudson. He will be greatly missed. Members of his loving family include: two sons and two daughters in law, Gerard and Kathryn Earabino of Walpole, MA, Kevin and Hadley Earabino of both Decatur, GA and Raleigh, NC; two daughters and a son in law; Kathleen and Tracy Clark of Bedford, MA and Susan Verge of Roslindale, MA; six grandchildren, Anthony Earabino and Maria Earabino of Walpole, MA, Emily Clark and Benjamin Clark of Bedford, MA. Ryan Earabino of Raleigh, NC, and Dylan Verge of Roslindale, MA; a brother and a sister in law, Charles “Chuggie” and Paula Earabino of Boynton Beach, FL, a Sister and a brother in law, Marie and Francis Tosi of East Providence, RI, as well as many dear nieces and nephews. Visiting Hours will be held on Fri. March 12th from 5pm -8pm in the DUMONT-SULLIVAN FUNERAL HOME, 50 FERRY ST., IN HUDSON. A Funeral Mass will be celebrated on Sat. March 13th at 11am in St. Benedict Abbey Chapel , 252 Still River Rd., Still River, MA. All may meet at the chapel. Burial will be held at a later date in St. Patrick Cemetery in Hudson. In lieu of flowers the family encourages donations in Joe’s loving memory to St. Benedict Abbey, 252 Still River Rd., Still River, MA 01467.

The family of Joseph P. Earabino created this Life Tributes page to make it easy to share your memories.