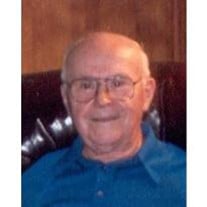 Joseph Edward Packor, 95, of Hudson died peacefully Sunday, February 22, 2009 at Potomac Hospital in Woodbridge, Virginia surrounded by loving family members. He was born September 24, 1913 in Nashua, a son of the late William and Petrelina (Bartis) Packor. He was predeceased by his beloved wife, Ruth (Reynolds) after over 55 years of marriage. He was also predeceased by his five brothers. He had one sister. He spent most of his life in the Nashua – Hudson area before relocating to Virginia in late 2007 to be with his daughter. Joseph was a graduate of Bentley College, Boston, MA. Before his retirement he served as a general manager at Gregg and Sons for many years and then at Triangle Pacific. He held a 3rd Degree with the Knights of Columbus and was a founding member of St. John the Evangelist Catholic Church in Hudson where he was an active member of the men’s group. In his younger days he was a Sea Scout leader and participated in many YMCA programs. He is often remembered for his years as a popular basketball official. He refereed high school, college and town leagues. He enjoyed rooting for the Red Sox and attended several games including a game to celebrate his 90th birthday. In addition to this he was a talented woodworker who took pleasure in creating intricate projects for the family and especially for his granddaughters. He will be remembered as a loving and caring man who was always ready to help his extended family and friends. He is survived by his daughter, Mary-Ellen Jenney and son-in-law, Col. David L. Jenney of Lake Ridge, VA.; his two granddaughters: Pamela A. Irvine of Arlington, VA and Lisa M. Mykleby and husband, Col. Mark Mykleby of Beaufort, SC.; and three great grandchildren: Keaton Mykleby and Harper and Alice Irvine. He is also survived by several nieces, nephews and cousins. Visiting Hours will be held on Thurs., Feb. 26th from 6 to 8 pm in the DUMONT–SULLIVAN FUNERAL HOME, 50 Ferry St., Hudson. A Funeral Mass will the celebrated on Fri.. Feb. 27th at 9:30 am in Blessed John the XXIII Parish at St. John the Evangelist Church, 27 Library St. Hudson. All to Meet At Church. Burial will follow at St. Patrick’s Cemetery, Hudson. In Lieu of flowers sympathy may be expressed by donations to St. Vincent de Paul Food Pantry in Blessed John the XXIII Parish at St. John the Evangelist Church, 27 Library St. Hudson, NH 03051.

The family of Joseph E. Packor created this Life Tributes page to make it easy to share your memories.