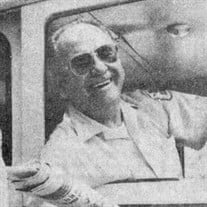 Joseph E. Willitts, 96, of Hudson, NH, formerly of Medford, NJ passed away peacefully on Friday, August 30, 2019. Born in Lumberton, NJ on November 18, 1922, Joseph lived in Medford, NJ before moving to Hudson, NH after the passing of his wife in 2015. He was a WWII veteran in radio security serving in Guam as a member of the Army AirForce. Following his military service, he worked for the Pennsylvania Railroad. He was the very first Letter Carrier for the Medford Post Office, including Medford Lakes, and retired after 35 years. He then became a custodian for St. Mary’s Catholic School in Medford where he worked for 25 years. Joseph volunteered as Fire Police for the Union Fire Company in Medford. He was a Ham Radio operator, he had a wonderful sense of humor and enjoyed telling jokes. Joseph also spent time listening to the local police and fire scanner. He is pre-deceased by his wife of 69 years Margaret (Bowker) Willitts. He is survived by two daughters and son’s in law, Marilyn and Benes Konecny of Hudson, NH with whom he resided and Tracy Jo and William Fow of Zephyrhills, FL; seven grandchildren, Leah, William, Kimberly, Christina, Katie, Tobin, and Leilani; eight great grandchildren; and several nieces and nephews. Relatives and friends may call on Saturday, September 7, 2019 from 9-10 AM at the Mathis Funeral Home, 58 N. Main Street, Medford, NJ. A funeral service will follow at 10 AM, at the funeral home. Interment will be in Parkview Cemetery at Historic Medford Village. In lieu of flowers, contributions may be made in Joseph’s Memory to Union Fire Company, 1 Firehouse Lane, Medford, NJ, 08055 or Home Health & Hospice Care, 7 Executive Park Drive, Merrimack, NH 03054. Local arrangements were handled by the Dumont-Sullivan Funeral Home in Hudson.

Joseph E. Willitts, 96, of Hudson, NH, formerly of Medford, NJ passed away peacefully on Friday, August 30, 2019. Born in Lumberton, NJ on November 18, 1922, Joseph lived in Medford, NJ before moving to Hudson, NH after the passing of his wife... View Obituary & Service Information

The family of Joseph E. Willitts created this Life Tributes page to make it easy to share your memories.