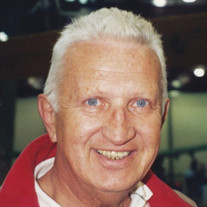 Joseph F. Kwiatkowski, 90, of Nashua, NH died Monday October 30, 2017 surrounded by loving family. Joseph was born on July 20, 1927 in Brooklyn, NY. Son of the late Stanley and Victoria (Michalunes) Kwiatkowski and was also predeceased by a sister, Jean Kwiatkowski in 2002. Joseph was a High School graduate of Stuyvesant High School, NYC and after high school, at age 17, he enlisted right into the Navy for WW2, with his parents consent where he served as Fireman First Class aboard the USS Sicily and was the recipient of the Victory Medal and the American Theater Medal. After WW2, Joseph attended University of Maryland , and then Fordam University. Graduating from Fordham with a BS Degree with a Major in Chemistry. He then later attended Brooklyn Poly-tech to earn his Masters Degree in Metallurgy. After Graduating College he worked for Sperry, and then Sperry-Grumman where he worked as a Materials Engineer on the Lunar Module Program of Project Apollo. After leaving Sperry-Grumman, Joe moved the family from Garden City, NY to Nashua, NH to take an engineering position at Sanders Associates where he stayed for 25 years until his retirement. He was a Parishioner of St Casmir Church and then later St Patrick's Church of Nashua and Joseph was the President of the NH Chapter of American Society of Metals in the mid 1970's. He was an avid football fan, before football was even popular he would sell programs at the NY Giants games at the old Polo Grounds as a way to get in to see the games and earn some money. He was also a big fan of music, from Artie Shaw, to Bunny Berri gan, to Frank Sinatra and Johnny Cash. He leaves behind his beloved wife of 58 years, Irene (Koren) Kwiatkowski; three Children,  Karen Kwiatkowski of Merrimack, NH, Ken Kwiatkowski and his wife Shannon of Bradenton, FL and John Kwiatkowski and his wife Bertie of Nashua, NH; grand children John Macleod and his wife Alicia and their daughter Charlotte of Nashua, Chris Macleod of Hudson, NH, Austin Macleod of Merrimack, NH, Stephen Gage of Merrimack, NH, AJ Kwiatkowski of Bradenton Florida, Victoria Kwiatkowski of Bradenton, Florida and Olivia Gage of Nashua, NH. Visiting Hours will be held on Thursday November 2nd from 4-7pm in the Dumont-Sullivan Funeral Home, 50 Ferry St., Hudson. A Funeral Mass will be celebrated the following morning beginning at 9:30am in St. Patrick’s Church, 29 Spring St., Nashua with burial taking place immediately after in Holy Cross Cemetery, Hudson.

Joseph F. Kwiatkowski, 90, of Nashua, NH died Monday October 30, 2017 surrounded by loving family. Joseph was born on July 20, 1927 in Brooklyn, NY. Son of the late Stanley and Victoria (Michalunes) Kwiatkowski and was also predeceased by a... View Obituary & Service Information

The family of Joseph F. Kwiatkowski created this Life Tributes page to make it easy to share your memories.