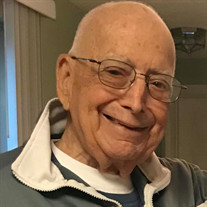 Joseph A. DiPietro, beloved husband of the late Marguerite (Kennedy) DiPietro, passed away peacefully on January 5, 2022. He was born on August 15, 1931 in Somerville, MA, son of the late Marie Rotondo and Carmine DiPietro.   Joseph met Marguerite, whom he called "Peg of my heart," at a high school dance. Joseph was outgoing to his shy Peggy. He once displayed his love for her by loudly playing Frank Sinatra from his car parked outside her history classroom. Joseph and Marguerite wanted a large family and lovingly raised seven children.   Joseph was a decorated Veteran, bravely serving as a medic in the Korean War. He then graduated from Wentworth Institute of Technology with a degree in architecture. As an architect, he enjoyed a distinguished 40-year career that in later years included the restoration of Federal courthouses throughout New England.   Joseph had a lifelong love of sports and in his younger years was active in basketball and softball. Later in life he enjoyed golf and bowling. Joseph's favorite pastime was spending time with his large family. His wife, children, grandchildren, and great-grandchildren were simply his world. His family was so blessed to have him for all the guidance, support and love that he provided every day.   Joseph is survived by his seven children; Joseph and Janice DiPietro of Wickford, RI; Mark and Karen DiPietro of Charlestown, MA; Elaine and Edward Murphy of Ware, MA; Maria Hamilton of Tewksbury, MA; John and Elfleda DiPietro of Hudson, NH; Lorraine Kerrigan and her partner Paul Woodworth of Salem, NH; Jeanne and Greg Harrington of Litchfield, NH. He is also survived by his godson Robert O’Leary and his wife Diane of Charlestown, MA. Joseph was the proud Papa of eighteen grandchildren and twenty great-grandchildren. Joseph is also survived and loved by his brother Carl DiPietro and many nieces and nephews. Joseph was predeceased by his sister Claire Pratti and his son-in-law, James Hamilton.   In view of the current pandemic, a private service will be held on Wednesday, January 12th with an outside and more inclusive Celebration of Life to be scheduled for the spring. In lieu of flowers, donations may kindly be directed to two of Joseph's favorite charities; Little Sisters of the Poor, Acireale, Italy, where his niece Sister Joseph serves. Checks may be payable to Dumont-Sullivan Funeral Home and mailed to 50 Ferry St., Hudson, NH 03051. The funeral home will be collecting all donations and wiring the funds directly to the Little Sisters of the Poor. Donations may also be directed to St. Jude Children’s Research Hospital at www.stjude.org

Joseph A. DiPietro, beloved husband of the late Marguerite (Kennedy) DiPietro, passed away peacefully on January 5, 2022. He was born on August 15, 1931 in Somerville, MA, son of the late Marie Rotondo and Carmine DiPietro. &#8232;&#8232;Joseph... View Obituary & Service Information

The family of Joseph DiPietro created this Life Tributes page to make it easy to share your memories.

Joseph A. DiPietro, beloved husband of the late Marguerite (Kennedy)...