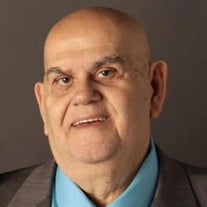 USAF Chief Master Sergeant (Ret.) John Sullivant, age 79, of Nashua NH passed away peacefully in his sleep on May 25, 2020 at home surrounded by family. He was born August 22, 1940 in Chester, PA, the son of Greek immigrants, Peter and Matina Sullivant (Serras). He married Toula Germeni of Patras, Greece in 1964. John was pre-deceased by his brothers, Jerry and Nonda Sullivant of Brookhaven, PA. He is survived by his former wife, Toula Sullivant, and their three daughters: Tina Serras of Nashua, NH; Nika Serras, her husband Dennis, and their children Maia and Jacobi of Los Angeles, CA; and Pamela Aughey and her husband David of Nashua, NH. He is also survived by his brother George Serras and wife Carol of Prattsville, NY; his sister Stella Poulis and husband George of Garnet Valley, PA; and many beloved nieces, nephews, and cousins. John graduated from Chester High School in 1958 and joined the United States Air Force. He was a Military Police Officer with a deployment to Vietnam during the war, as well as assignments in the Middle East, Europe, and Asia. He became the Security Program Director at NASA Dryden Space Center where he safeguarded the first space shuttle; was the Air Force supervisor at NASA Mission Control Center during test shuttle landings; orchestrated the defense of NATO installations in Europe; and developed training scenarios for ground troops. He received two Meritorious Services Medals, five Air Force Command Medals, the Air Force Outstanding Airman Ribbon, and 27 other decorations. He earned degrees from Troy State University, Southwest Texas University, and the University of Southern California. Retiring from the U.S.A.F. in 1982, John spent his remaining work years as a security consultant, including time in Zambia, Tanzania, Turkey, and Greece. He also contracted time under the Nuclear Regulatory Commission of Midland, MI and Seabrook, NH power generation plants, the U.S. Department of Defense, and the U.S. Army Intelligence & Security Command. Additionally, he worked at Raytheon in support of the U.S. Strategic Arms Reduction Talk Treaty (START). By 1999, John began publishing magazine articles and wrote two books which have been used for college curriculums. He was a longtime volunteer at the St. Philip Greek Orthodox Church and AHEPA in Nashua, President for the New Hampshire Chapter of the American Society for Industry Security International (ASIS), a board member for the Nashua C.E.R.T. program, and was a Master Mason at the Joseph Worsely Lodge in Lincoln, MA. John loved to throw celebrations - from family reunions, to annual police pig roasts, to a thirty-thousand-person event on the Mojave Desert lakebed so Americans could witness the first space shuttle landing. He encouraged others to be their best and treat failures as opportunities, to not take themselves too seriously, and to always be up for adventure. Due to pandemic protocols, the funeral service will be privately held for a select few only at St. Philip Greek Orthodox Church in Nashua, NH at 9:45am on Monday, June 1. We invite you to join us in the church parking lot at 10:15am to witness the pallbearers transfer the casket to the hearse, and follow the procession from the church, past the house, and to the New Hampshire State Veterans Cemetery in Boscawen. Attendees other than the select few will be required to remain in their cars and witness the burial with military honors at a distance. There will be no reception. A celebration of life will be planned for next year after pandemic protocols are lifted. In lieu of flowers, please make a donation in John’s name to St. Philip Greek Orthodox Church http://www.stphilipnh.org/donate/ or to the New Hampshire State Veterans Cemetery https://nhvca.org/

USAF Chief Master Sergeant (Ret.) John Sullivant, age 79, of Nashua NH passed away peacefully in his sleep on May 25, 2020 at home surrounded by family. He was born August 22, 1940 in Chester, PA, the son of Greek immigrants, Peter and Matina... View Obituary & Service Information

The family of John Sullivant created this Life Tributes page to make it easy to share your memories.