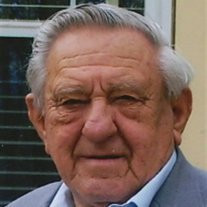 John F. Sojka, 82, of Hudson, NH died unexpectedly on Tuesday April 9, 2013 peacefully at home. John was born on September 7, 1930 in Derby, CT son of the late Jacob and Mary (Skowronski) Sojka. John was the loving husband of Anne (Palanski) Sojka with whom he shared more than fifty-nine years of marriage. John and Anne owned and ran J.S. Towing Connection in Hudson where they served their community for more than forty years. John was a proud member of the New Hampshire Towing Association and Elks Lodge 720. He was a founding member of the Hudson Towing Association and On Call Towing Service of Hudson. He enjoyed traveling to Florida and Foxwoods with Anne, as well as boating and relaxing at the lake. He was a true “Family Man” who loved his wife, children and grandchildren dearly and let’s not forget his dog Sandi. He will be greatly missed. Besides his loving wife Anne, John is survived by three sons, Steven and his wife Cheryl, Brian and Alan and his wife Elaine all of Hudson; a sister, Jean Kubik of Bridgeport, CT; two grandsons, John Alan and Matthew Steven both of Hudson and many nieces, nephews and dear friends. Visiting hours will be held on Sunday April 14th from 2-5pm in the DUMONT-SULLIVAN FUNERAL HOME, 50 Ferry St., Hudson. A Funeral Mass will be celebrated the following day at St. Kathryn’s Church, 4 Dracut Rd., Hudson beginning at 10am with burial immediately following the service in St. Patrick Cemetery, Derry Rd., Hudson. In lieu of Flowers the family has requested that donations be made in John’s name to The American Heart Association, 7272 Greenville Ave., Dallas, TX 7531.

The family of John F. Sojka created this Life Tributes page to make it easy to share your memories.