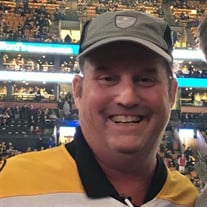 John Peterson, 57, of Amherst, NH, raised in North Andover, MA, died Monday, June 24, 2019 following a period of declining health. He was born October 31, 1961 in Winthrop, MA, son of the late Frederick and Joan (Matthews) Peterson. John was the husband of Linda (Sobocinski) Peterson of Amherst, with whom he shared 32 years of marriage. He was also the proud father of Alyssa Peterson of Philadelphia, PA, and Ryan Peterson of Medford, MA. John was a Physical Therapy Manager at CPTE for many years. He was also an Athletic Trainer with several area high schools, including Souhegan High School, Merrimack High School, and Alvirne High School as well as the former Athletic Trainer for the Junior Monarchs Hockey Team. John was a proud season ticket holder for the New England Patriots and was an avid fan of the Boston Bruins and Boston Red Sox. He was a devoted family man that always put family first. Music was John’s passion. He not only loved attending concerts, but was very knowledgeable about music as a whole. John enjoyed nothing more than listening to blues musician Peter Parcek, who even gave John a shout out at his most recent concert, dedicating a song to John. It is a moment that the family will always treasure. Besides his loving wife and children, John is survived by a brother, Michael Peterson of Newmarket, NH, two sisters, Susan Norton of Chester, NH, and Nancy Bassett and her husband Bob of North Andover, MA, two brothers in law, Don Sobocinski of San Jose, CA and Rich Sobocinski and his wife Laura of Huntington Station, NY, as well as many beloved aunts, uncles, nieces, nephews, and cousins. Visiting hours will be held on Thursday, June 27th from 5pm - 8pm in the DUMONT-SULLIVAN FUNERAL HOME, 50 FERRY ST. IN HUDSON, NH. A Mass of Christian Burial will be held on Friday, June 28th at 10am in St. Thomas Aquinas Church, 26 Crystal Ave. in Derry, NH. All may please meet at church. Burial will be private. In lieu of flowers the family encourages donations to be made in John’s loving memory to either Home Health & Hospice Care, Attn. Hospice House at www.hhhc.org or American Brain Tumor Association at www.abta.org.

The family of John Peterson created this Life Tributes page to make it easy to share your memories.