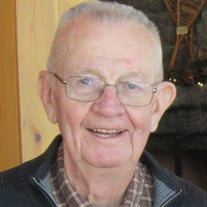 John Francis Moran, 86, died September 8, 2018, in Hudson, N.H. John was born on December 25, 1931, in Manchester, N.H., a son of John Francis Moran and Mary (Murphy) Moran. He graduated from St. Joseph’s High School in Manchester in 1949. In 1953, he graduated from the University of New Hampshire with a bachelor’s of science in electrical engineering. Following graduation, John entered the United States Army, for which he served as a first lieutenant from 1953 to 1955 and subsequently as a reservist for six years. On September 6, 1954, he married Barbara Stinson in Dallas, Texas. They were married for 63 years until her death August 17, 2017. After his time in the Army, John worked for the General Electric Co. for 36 years in Syracuse and Utica N.Y., and Nashua, N.H., as a computer systems engineer for surveillance systems and electronic warfare. He was involved with many of the first applications of digital computers as they revolutionized analog systems in military electronics. Later, he was a member of the mission planning department for Mitre Corp. in Bedford, Mass. In retirement, John was an adjunct instructor for the New Hampshire Technical College in Nashua, and volunteered with the Disabled American Veterans and American Cancer Society as a medical driver. John is survived by his children, John Francis Moran IV and his wife, Kathryn, of Manchester, N.H.; Mary Ryan and her husband, Joseph, of Sauquoit, N.Y.; Michael J.Moran and his wife, Theresa, of Saratoga Springs, N.Y.; and Eileen Moran of Oswego, N.Y.; grandchildren Courtney Argiras, Jessica Stevens and her husband Michael, Ellen DeSimone, Ryan DeSimone, John Francis Moran V, Carly Moran, Amy Baker, Wyoma Crandall and Michael Moran; and great-grandchildren Eleni, Sophia, Mia and Cameron. He is also survived by his siblings, Mary Madonna Moran, order of the Sisters of Mercy, Manchester, N.H.; Dr. Gabriel Moran, New York, N.Y.; Dorothy Perkins and husband, Lawrence, of New Boston, N.H.; and his brother-in-law Daniel Lyons of Leesburg, Va. John was predeceased by a sister, Louise Lyons, and a sister-in-law, Maria Harris. The family would like to express its gratitude to many of the staff from Right at Home of Southern New Hampshire and Home Health & Hospice Care of New Hampshire. Because John held so many charities dear, in lieu of flowers it is requested that any donations be made to a charity of your choice. A funeral mass to celebrate John’s life will be held at 10 a.m. on Friday, September 21, at St. Kathryn Church, 4 Dracut Road in Hudson, N.H.; followed by burial in St. Patrick’s Cemetery. There will be no calling hours.

The family of John F Moran created this Life Tributes page to make it easy to share your memories.