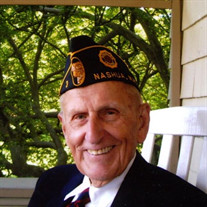 John W. Latvis passed away September 9, 2016 peacefully at home surrounded by his wife, five children, and their spouses. He was born on May 18, 1920 at home to Lithuanian immigrant parents Alek and Agnes (Molis) Latvis. He died at the age... View Obituary & Service Information

The family of John W. Latvis created this Life Tributes page to make it easy to share your memories.