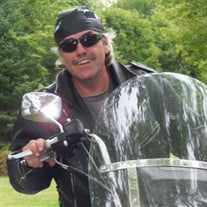 John F. Demers, 50 of Nashua, NH died Wednesday, June 3, 2015 at his residence following a brief illness. He was born March 5, 1965 in Natick, MA, son of Lorraine (Trudeau) of North Haverhill, NH and the late Charles Demers. John was also predeceased by a brother, Bruce Demers, and a sister Elaine Vorce. John was an avid NASCAR fan, he loved racing and was a Harley Davidson enthusiast. He also was a fan of the New England Patriots and enjoyed watching baseball on television. Besides his loving mother, his loving family includes his longtime partner Christine Tarris of Nashua, a daughter Alexandria “Alex” Demers of Manchester, three brothers, Wayne Demers of Dalton, NH, Barry Demers of Littleton, NH, Brian Demers of San Diego, CA, a sister Diane Paquette and her husband John of Monroe, NH, as well as many nieces and nephews. Visiting hours will be held on Sunday, June 7th from 1pm-3pm with a Service of Remembrance at 3pm in THE DUMONT-SULLIVAN FUNERAL HOME, 50 FERRY ST. IN HUDSON. A graveside service will be held at 1pm on Monday, June 8th in Horse Meadow Cemetery, North Haverhill, NH. In lieu of flowers the family encourages donations be made in John’s loving memory to the American Cancer Society at https://donate.cancer.org/index

The family of John Demers created this Life Tributes page to make it easy to share your memories.