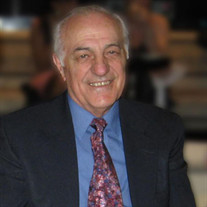 John Dalessio, Sr., a lifelong resident of Hudson and Nashua, drifted into the wild blue yonder on July 6, 2021. He was born in Winchester, MA, on December 7, 1933, son of the late Domenic Dalessio and Grace Dalessio Stokes and step father George Stokes. John was the beloved husband of Gerri (Judkins) Dalessio of Nashua. John grew up in Woburn, MA. At age 18, he enlisted into the USAF, serving his country honorably for 20 years. After basic training, John was sent to Biloxi, MS, for training as an Airborne Radio Operator. In 1952 he was assigned duty in the Philippines on the B-29 Super Fortress. Volunteering for special duty, he was sent to Korea in 1953. John flew many missions on various types of aircrafts, including Air / Sea rescue assignments. In 1954, John returned to the states and called Helena, MT and Bismarck, ND home before heading over seas again, this time to Izmir, Turkey in 1958. While in Turkey, he was Director of Military Youth Center. In 1961 he returned stateside, going to Altus, Ok as an Education and Training Technician with the Ballistic Missile Squadron. Other assignments were in Plattsburgh, NY, Hanscom Field, and finally, Vietnam during the TET Offensive. During this offensive he was awarded the Bronze Star for setting up a secondary perimeter during assault on Tan Son Nhut AFB. Returning to the states in 1968, John was assigned recruiting duties in Lowell, MA. Retiring in February of 1972, he was employed at Fashion Neck Wear in Hudson where he met and married the love of his life, Gerri. John was later employed as a Service Manager with Electrolux and was a dedicated employee for 17 years. During his time off he was involved with the Hudson / Nashua Suburbanettes Drill and Drum Corp.. He was also one of the first members of Hudson’s Code of Ethics Committee. John was predeceased by three brothers, Gerald of Hudson, NH, Domenic of Florida, Charles “Sonny” of Woburn, MA. Besides his wonderful wife, Gerri, of 37 years, he is survived by six children; Debbie Todd and her husband John of Dennis, MA, Jacqueline Richardson and her husband Matt of Hudson, John Dalessio, Jr. and his wife Tracey of Milford, Michelle Liliedahl and her husband David of Manchester, Troy Tikkanen and his wife Jennittia of Laconia, and Christopher Dalessio and his wife Heidi of Bethel, ME, as well as nine beautiful grandchildren and six great grandchildren. A Mass of Christian Burial will take place on Tuesday, July 13th at 11am in Immaculate Conception Church, 216 East Dunstable Road in Nashua, NH. All are asked to please meet at church. A graveside service with military honors will be held following mass at 1:30pm in the NH State Veteran Cemetery, 110 DW Hwy, Boscawen, NH. In lieu of flowers, the family suggests donations be made in John’s loving memory to Homes For Our Troops at www.hfotusa.org

John Dalessio, Sr., a lifelong resident of Hudson and Nashua, drifted into the wild blue yonder on July 6, 2021. He was born in Winchester, MA, on December 7, 1933, son of the late Domenic Dalessio and Grace Dalessio Stokes and step father... View Obituary & Service Information

The family of John Dalessio, Sr. created this Life Tributes page to make it easy to share your memories.

John Dalessio, Sr., a lifelong resident of Hudson and Nashua,...