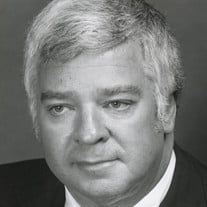 John F. Clancy, 84, of Manchester, NH, died Thursday November 19th, 2015 at Mount Carmel Health Care Center in Manchester, NH surrounded by his loving family. John was born on December 1st, 1930 in Millis, MA only son of the late Joseph and Nora (Sullivan) Clancy. John was also predeceased by his beloved Aunt Margaret F. Sullivan. John attended the University of New Hampshire, class of 1953, where he played football and was a member of the SAE fraternity.  John was an Army Veteran honorably discharged at the rank of Captain after serving several posts stateside and also in Germany.  He started his post-service career as a Police Officer in Nashua NH.  He then sold insurance for the Archie Slawsby Agency; next he ventured into the love of his career, selling homes.  He worked for many years as the salesman for Rodgers Bros. Home Builders, being affectionately know as "John Clancy - The Home Finder" in radio and print advertisements.  He later started his own firm, John F. Clancy Associates, with his loving wife and business partner, Nancy. John was great at and loved telling stories and jokes.  He was a superb public speaker, acting many times as Emcee for the NH Home Builders Association, the Nashua Police Relief Association, the Wild Irish Breakfast and many other events. He was an avid fan of the Boston Bruins, Boston Red Sox and the New England Patriots and loved to watch college football. He will be remembered as a great son, friend, father, grandfather and husband. Besides his loving wife Nancy of which he was married to for 62 years, survivors include 7 children, 11 grandchildren and 6 great grandchildren.  They include children: John J. of York Beach ME, Timothy P. and Laura of Milford NH, Gregory N. and Kathy of Nashua NH, William F. and Sharon of Buxton ME, Jo Ann P. and Jerry McCarthy of Thornton NH, James H. and Lynne of Francestown NH, Thomas E. and Jamie of McLean VA.  Grandchildren: Seth, Conlan, Kelly, Molly, Ryan, Donovan, Luke, Bridget, Issac, Bailey and Christopher. Great grandchildren: Mylah, Elijah, Sean, Norah, Mia and Jackson. Survived also by his close cousin, Chris and Nancy Clancy of Dover, MA. Many nieces, nephews, brothers/sisters in-law, cousins and friends. Visiting Hours will be held on Sunday November 22nd from 1-4pm in the Dumont-Sullivan Funeral Home, 50 Ferry St., Hudson, NH. A Funeral Mass will be celebrated the following morning beginning at 9:30am in St. John XXIII Parish at St. John the Evangelist Church, 27 Library St., Hudson. Burial will be private. In lieu of flowers donations are requested for the Wounded Warrior Project, P.O. Box 758517, Topeka, Kansas 66675.

The family of John F. Clancy created this Life Tributes page to make it easy to share your memories.