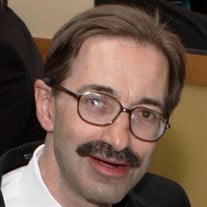 John Christopher Boutselis, 64, passed away on February 22, 2017, after a 20-plus-year battle with Parkinson’s disease and Lewy body dementia in Bedford, N.H. John was born on Oct. 3, 1952, in Lowell, Mass., the son of the late Alexander G. and Catherine R. (Zingovas) Boutselis. He attended Lowell public schools and graduated from then Lowell State University with a Bachelor of Arts in Psychology. He also attended Anna Maria College, working toward a graduate degree in counseling psychology. The youngest of four sons, John was a gifted athlete, who later became a competitive runner and marathoner. He raced throughout New England, achieving a multitude of first place and top finishes, along with age group honors. He competed many times in the Boston Marathon, with a personal best of 2:50:52. While running was certainly a primary passion, John’s children were his heart and soul. A father of four now-grown children, Sean, Marissa, Michael and Andrew, the best moments of John’s life were not at the finish line, but any time spent with his family. From late-night pizza and nightly story times, lots of games of catch and Frisbee, vacations at Newfound Lake, and especially, weekend trips away, museum visits and outdoor fun with his family, John loved nothing more. He worked many years in the liquor business and retail, taking great pride in the ownership of a wine shop for a short time as well. John’s journey through his illness would eventually lead to managed-care facilities and lessening capabilities, but John remained confident that one day he would be cured. He is survived by his beloved children and their respective partners; Sean Boutselis and Laura Fonden of Merrimack; Marissa and Justin Brunelle of Hooksett; Michael and Hannah Boutselis of Manchester; and Andrew Boutselis of Brooklyn, N.Y., along with two grandchildren, Logan and Skyla Brunelle and the mother of his children, Pamme Boutselis of Litchfield. He is also survived by one brother, James Boutselis of Lowell, his sister-in-laws Bonnie Boutselis of Hudson and Antonia Boutselis of N. Andover, and many nieces and nephews. He was predeceased by two brothers, Dr. George Boutselis and William Boutselis. Visiting hours will be held on Monday, Feb. 27th from 5pm - 8pm in the DUMONT-SULLIVAN FUNERAL HOME, 50 FERRY ST., HUDSON, NH. A funeral service will be held on Tuesday, Feb. 28th at 11am in St. Philip Greek Orthodox Church, 500 west Hollis St., in Nashua. All may meet at church. Burial will be in Pinecrest Cemetery in Litchfield and will take place in the Spring. In lieu of flowers, the family requests donations be made in John’s memory to The Michael J. Fox Foundation, P.O. Box 5014, Hagerstown, MD 21741-5014 or the VNA of Manchester & Southern New Hampshire, 1070 Holt Ave., Suite 1400, Manchester, NH 03109.

The family of John C. Boutselis created this Life Tributes page to make it easy to share your memories.