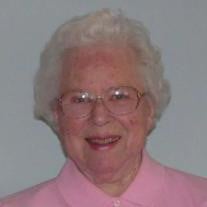 Joanne Emily (Spurk) Turner of Amherst, NH entered eternal life on January 14, 2013 at Amherst, NH. She was born in Greensburg, PA on March 29, 1932, the first child of John Charles and Mary Regina (Emond) Spurk. The family relocated to Lowell, MA. Joanne was educated at St. Michael School in Lowell, the Academy of Notre Dame in Tyngsboro, MA and Emmanuel College in Boston. She received the Bachelor of Arts Degree, mcl, in Chemistry and Physics. For several years she was a teacher of science and math. In 1959 she married Charles F. Turner of Haverhill, MA at St. Michael, Lowell. They made their home in Nashua, NH. They were blessed with six children. In 1963 they moved to Amherst, NH where they have resided since. Joanne was first and foremost a mother and homemaker. She also participated in several business ventures with her husband including a 30 year involvement at Isle au Haut, ME where Joanne was business manager and hostess at Turner Cove. Joanne was predeceased by her parents and infant son Stephen Joseph Turner and her brother, Dr. John H. Spurk of Haverhill, MA. She is survived by her husband Charles F. Turner of Amherst, NH, and children: Charles J. Turner of Ridgway, CO, Mary A. Clague of Twinsburg, OH, Susan T. Foelix of Lexington, MA, John P. Turner of Dunbarton, NH and Joanna T. Bisceglio of Waterbury Center, VT. She is also survived by her beloved brother, Stephen J. Spurk of Haverhill, MA. In addition, she is survived by 17 grandchildren: Hans, Heidi, Hannah and Haley Turner; Robert and his wife Leah, James and Courtney Clague; Justin and Toby Foelix; Maria, Carlos and Cecilia Turner; and, Kateri, Brielle, Luke and Julia Bisceglio, Julie and her husband Bryan Andrasik and one great grandson, Zachary Andrasik. She is also survived by several cousins and special friends. Calling hours will be private and friends of the family can contact Sue at [email protected] for details. A Mass of Christian Burial will be celebrated at St. John Neumann Church, 708 Milford Rd., Route 101A, in Merrimack, NH on Friday January 18th, at 10a.m.. Family and friends are invited to gather at the church. Interment is to follow in Holy Cross Cemetery, Ledge St., in Hudson, NH. In lieu of flowers, contributions in Joannes loving memory may be made to N.H. Catholic Charities at www.nh-cc.org

The family of Joanne Turner created this Life Tributes page to make it easy to share your memories.