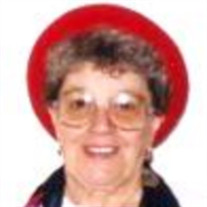 Joan Kalil Dearborn, 87 of Hudson NH passed away December 20, 2020 at Southern NH Medical Center in Nashua NH. She was Born on July 10, 1933 in Lawrence MA, daughter of the late Charles and Adeline (Martel) Kalil. Joan attended Hudson schools and was in the first Graduating class from Alvirne High School of 1951. She was a member of the St. Johns Parish, the Women’s Junior league, and was active in brownies and scout camps. She also belonged to Alvirne High School Alumni Assoc. One of her highlights in life was she married her high school sweetheart Bud her dashing sailor on June 23, 1951. They were married 61 years, now to be reunited in Heaven. Together they ran Dearborn’s Electric as a team for many years. Joan spent time at Southern New Hampshire Hospital as a Volunteer, and her lady friends had many luncheons together. She had the mischievous spirit writing the Secret Reporter column for the Hudson News in their day. Joan was also a member with the Hudson Chamber of Commerce in 1968. She loved to host parties, and her “Yankee Swaps” were epic. Joan was an avid reader, always had three books going at time and had great interest in talking politics. To sum up her life I quote from her Grandson T Grant “She was righteous, tenacious, shrewd and her love made an impact on all who loved her. She is Predeceased by Grant Wayne Dearborn, her loving husband of 61 years. Sister Patricia Ann Blanchard, 76, and her Husband Kenneth Blanchard of Hudson NH. Survived by One Brother Charles & Brenda Kalil of North Conway NH. Brother in-law- Gary & Clarice Dearborn of Hudson NH. Special cousin Robert & Mary Kalil of Nashua. Her four daughters Candy Paradise & partner Matt Shapario of Hudson NH, Karen & Gordon Garvin of Hillsboro NH, Tracey & John Grosvenor of Hudson NH, Kelly & Dan Luce of Deering NH. Six Grandsons Jason & Kristen Paradise, Joshua Paradise, Joey & Janis Paradise, William Garvin & Fiancé Amanda Nazer, Tim & Jessica Dearborn, Corey & Cassandra Boilard and one Granddaughter Melanie Grosvenor. 17 great grandchildren and many nieces, nephews, god children and cousins. There will be no services at this time. A celebration of life will be planned for a later date. Memorial donations can be made in Joans name to the George H. and Ella M. Rogers Library 194 Derry Road Hudson NH 03051.

The family of Joan Dearborn created this Life Tributes page to make it easy to share your memories.