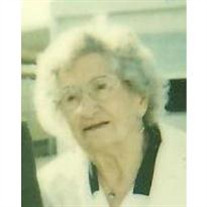 Jennie J. (Fusi) Pransky, 106, of Hudson, NH died Saturday September 3, 2011 at Fairview Nursing Home in Hudson, NH. Jennie was born on February 15, 1905 in Mansfield, MA daughter of the late Stephen and Virginia (Mara) Fusi and was the loving wife of William G. Pransky (2001). She was also predeceased by a brother, Henry Fusi; a sister, Sister Ruth Concepta and a grand nephew Paul Walsh. Life challenges began early in Jennie Fusi Pransky's life. At age six, she and her younger siblings were raised separately under state care after their mother's sudden death. Jennie went on to become a nurse and it was during this time, that she met her husband Bill. Bill was the bus driver she saw each day on her way to work and they were married in 1942. Jennie and Bill lived in Somerville, MA for many years and there she worked at W.T. Grant department store. Aunt Jen and Uncle Bill were a strong and loving presence in the lives of Donna, Tammy and their mother Pat. They will always be forever grateful to them and will keep those memories close to their hearts. At time of retirement in 1974, they moved to a warmer climate in Mesa, AZ and enjoyed many happy years. While in her nineties, Jennie first battled breast cancer and then faced life's most unfair challenge by becoming both completely blind and deaf. After Bill's death in 2001, she moved to Fairview Healthcare in Hudson, NH and became family to her kind and attentive caregivers. Jennie was a remarkable, caring lady and taught us all humility and perseverance. With a heart full of love, her concern was always for others before herself. Her strong faith, strength of character, and sense of humor would warm your heart. She will be deeply missed. Jennie is survived by a sister, Virginia E.F. Alcox of Sarasota, FL; a niece, Catherine Walsh of Sarasota, FL; two nephews, Walter D. Alcox Jr. of FL and Stephen Fusi of Bedford, MA; four grand nieces, Donna Staffier-Sommers of Amherst, NH, Tammy Hughes of Woburn, MA, Debby Mansor of Nashua, NH and Gina Fusi of Bedford, MA; four grand nephews, Allan Alcox of Park City, UT, David Alcox of Milford, NH, David Walsh of FL, Peter Walsh of CA and all their spouses and children. Visiting Hours will be held on Thursday Sept. 8th from 5-7pm in the DUMONT-SULLIVAN FUNERAL HOME, 50 FERRY ST., HUDSON with a prayer service to begin at 6:30pm in the Funeral Home. Inurnment to take place at a later date in Arizona.

The family of Jennie J. (Fusi) Pransky created this Life Tributes page to make it easy to share your memories.