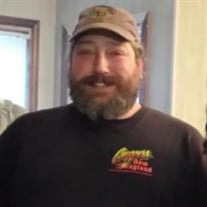 Jeffrey Aaron “Sideshow” Wilkins, 49, of Nashua, NH, died Saturday, September 25, 2021 at his residence in Nashua. He was born November 5, 1971 in Lowell, MA, son of Joan (Bergeron) Wilkins of Florida and the late Frederick Wilkins. Besides his father, Jeffrey was predeceased by his uncles, Henry “Hank” Wilkins and Richard Begeron, his aunts, Janet McArdle and Marcella “Marcy” Rondeau, and his brother in law, Capt. Steven Tower of the Goffstown NH Fire Dept. Jeffrey’s family moved to Hudson, NH when he was two years old. He attended schools in Hudson and graduated from Alvirne High School in 1989. He was most recently happily employed as a cook at The Bar Food & Spirits in Hudson, NH. Besides his loving mother, Joan, he is survived by his sister, Nancy Tower of Goffstown, nephews Kerry Tower and his wife Chelsey of Weare, NH, Garrett Tower of Goffstown, NH, a great niece, Quinn Tower of Weare, NH, as well as five aunts and several cousins. Following cremation, visiting hours will be held on Thursday, October 7th from 4pm - 7pm in the Dumont-Sullivan Funeral Home, 50 Ferry St., in Hudson. Burial will be private. Face masks and facial coverings are optional for those attending the services. In lieu of flowers, the family encourages donations be made in Jeffrey’s loving memory to St. Jude Children’s Hospital at www.stjude.org

The family of Jeffrey Aaron Wilkins created this Life Tributes page to make it easy to share your memories.