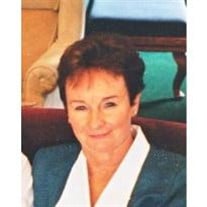 Jean Madeline (Vettori) Kearns, 74 of Hudson, NH, died Friday August 3, 2012 at the Southern NH Medical Center in Nashua surrounded by her loving family. She was born January 30, 1938 in Somerville, MA daughter of the late Arthur and Helen (Ellis) Vettori. She was also predeceased by a brother Carl Vettori. Jean was the wife of James Kearns of Hudson with whom she shared 48 years of marriage. Jean graduated Jeremiah Burke High School in 1955 and went on to be a bookkeeper for many years with several local businesses in Massachusetts and New Hampshire. She was devoted wife, mother, and friend as well as a loving Nana. Jean enjoyed tennis, playing cards, listening to music and reading. She will be remembered for being a wonderful cook and was a devoted parishioner of the Parish of the Resurrection in Nashua. Besides her loving husband James, she is survived by two sons James F. Kearns, Jr. and his fiance Kristen Powers of Nashua and Jeffrey Kearns and his wife Leslie of Austin, TX, a daughter Julie Robert and her husband Scott of Nashua as well as four grandchildren; Delaney, Ashley, Matthew, and Lily, two brothers, Arthur Vettori, Jr. of Middleboro, MA, Steven Vettori and his wife Lori of Dedham, MA, two sisters Elaine Hatch and her husband Robert of St. Petersburg, FL and Denise Kenney of Brewster, MA. A sister in law Collette Vettori of Taunton, MA as well as many nieces, nephews, and cousins. Visiting Hours will be held on Tuesday August 7th from 4pm-7pm in THE DUMONT-SULLIVAN FUNERAL HOME, 50 FERRY ST. IN HUDSON. A funeral mass will be celebrated on Wednesday August 8th at 11am in Parish of the Resurrection, 449 Broad St. in Nashua. ALL MAY MEET AT CHURCH. Burial will be private. In lieu of flowers the family encourages donations be made in Jean’s loving memory to Mayo Clinic, Dept. of Development, Atten: Multiple System Atrophy (MSA) 200 First St., SW, Rochester, MN 55905.

The family of Jean (Vettori) Kearns created this Life Tributes page to make it easy to share your memories.