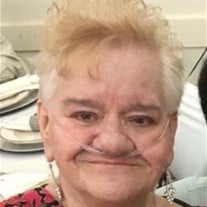 Janet Nolette, 78, of Rochester, NH went on to be with the Son of God at 7am on Christmas morning while in her home after battling cancer since 2004. Janet was the youngest of eight children of Lester and Mary (Oliver) Buttery and was born on January 14th, 1941 in Cambridge, MA and was predeceased by her five sisters and two brothers as well as a son, Richard A. Nolette and a grandson, Joshua Nolette. Janet met and married the love of her life Joseph R. Nolette on November 6th, 1960 and had her first child in August 1961 and then went on to have six children in nine years. Janet worked for Polariod for a number of years before deciding to become a nurse. She graduated from Chelsea Soldiers Home in MA at the top of her Nursing school in 1983; the same year her daughter was graduating from high school. Janet was a nurse for a number of years working in Massachusetts. Janet moved to NH after the death of her husband and worked as a nurse for a couple of years before retiring. Janet enjoyed knitting and crocheting dresses for her daughters for the holidays, camping with her husband and children, reading and completing crossword puzzles. She also liked going to the car races, playing bingo and cards and she loved having Golicks Ice Cream. She was a neighbor to the owner, Alan Golick, and he gave her free ice cream for life because she prevented a burglar from stealing from the store. Janet loved family gatherings and family dinners. She welcomed everyone into her home and fed anyone that entered. She was very religious and believed in her catholic upbringing while raising her children the same way. Janet belonged to the saint Mary’s parish in Rochester and believed that she would reunite with her soulmate in heaven. Janet is survived by Joseph R. Nolette Jr. and wife Teresa of Everett, MA, Edward L. Nolette and wife Zelia of Hudson, NH, Mary Anne Nolette of Rochester, NH, Thomas M. Nolette and wife Cheryl of Rochester, NH and Tammy Hosick of Raymond, NH; nine grandchildren, Adam, Meghan, Angela, Nicholas, Kyle, Alicia, Kayla, Nicole and Daniel as well as great grandchildren, nieces, nephews and dear friends. A special thanks to Constellation Hospice, Newburyport MA, especially to Robin, Gilly, Jessica, Kathy and Joel as they were wonderful to Janet in the last stage of her life.

Janet Nolette, 78, of Rochester, NH went on to be with the Son of God at 7am on Christmas morning while in her home after battling cancer since 2004. Janet was the youngest of eight children of Lester and Mary (Oliver) Buttery and was born... View Obituary & Service Information

The family of Janet Nolette created this Life Tributes page to make it easy to share your memories.