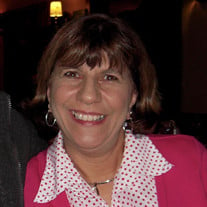 Janet (Long) Cirrone, 58, of Nashua, passed after a courageous fight against CNS Lymphoma on Monday, March 7, 2016 at the Community Hospice House in Merrimack surrounded by her loving family. She was born August 6, 1957 in Boston, MA, daughter of Charles and Helen (Ellis) Long of Billerica, Massachusetts. Janet was the loving wife of Michael Cirrone of Nashua, with whom she shared 39 years of marriage. Their marriage has been an amazing example of love to their entire family. The support, independence and love they gave each other was apparent in all they did. Janet really cannot be described in words. Those who have met Janet understand. It’s not who she was, it was how she made others feel. Upon entering a room with her, she made you feel welcomed, loved, cared for, safe and accepted. Janet is an inspiration and role model for all of us on caring and loving others. Passionate about helping people, she spent her entire career in Mental Health and Social Work. Janet was active with Immaculate Conception Parish in Nashua, where she was a part of the Health Ministry and Bible Study Group. She enjoyed camping, yard sales, taking trips to Old Orchard Beach and also relaxing at Humarock Beach in Massachusetts. Janet absolutely loved traveling with her three friends, “The Goddesses”, but her greatest joy was found when spending time with her family. She was a loving and caring wife, mother, grandmother, sister, and friend and will be missed by all who knew her. Besides her loving husband, Michael, and dear parents, Charles and Helen, survivors include two daughters; Angela Cirrone and Amy Cirrone and her wife Julie Salemi, two sons; Andrew Cirrone and his husband Matthew Szopa and Adam Cirrone and his wife Amanda, grandson; Jack Calzini, two sisters; Julie Rondeau and Charlene Lavey, a father in law and mother in law; Charles and Shana Cirrone and three very dear friends, “The Goddesses,” Sherri Royer, Kathy Carlino, and Sheila Albanese. Visiting hours will be held on Friday, March 11th 2016 from 5pm to 8pm in the DUMONT-SULLIVAN FUNERAL HOME, 50 FERRY ST., IN HUDSON. A funeral mass will be celebrated on Saturday, March 12th 2016 AT 12:30pm in Immaculate Conception Parish, 216 East Dunstable Road in Nashua. All may meet at church. Burial will be in Edgewood Cemetery in Nashua. In lieu of flowers, the family requests donations be made in Janet’s loving memory to Home Health & Hospice, c/o COMMUNITY HOSPICE HOUSE, 7 Executive Park Dr, Merrimack NH 03054.

Janet (Long) Cirrone, 58, of Nashua, passed after a courageous fight against CNS Lymphoma on Monday, March 7, 2016 at the Community Hospice House in Merrimack surrounded by her loving family. She was born August 6, 1957 in Boston, MA, daughter... View Obituary & Service Information

The family of Janet Cirrone created this Life Tributes page to make it easy to share your memories.

Janet (Long) Cirrone, 58, of Nashua, passed after a courageous...