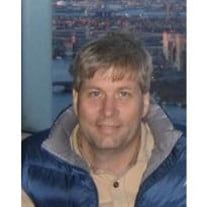 James Augustine Sullivan of Hudson died on Ash Wednesday Feb.17, 2010 having faced his most recent challenge of cancer with the same courage, grace and dignity that has characterized his entire life. He passed with friends and family by his side at the Community Hospice House in Merrimack. Mr. Sullivan was born on June 21, 1961 in Panama City, Florida to Charles and Constance Sullivan. His young life included stops in Washington, DC and Fairbanks, Alaska before his family settled in Hudson N.H. in 1970. Jim was known in his early years as an exceptional mechanic; he loved to work on cars and motorcycles. He was also a gifted athlete, having particularly excelled as a skier, hurdler, and pole vaulter. He earned Most Valuable Player honors for Track and Field his senior year at Alvirne High School, and he held the school’s pole vault record for over a decade. Mr. Sullivan’s life took a dramatic turn on June 19, 1979, however, as a freak diving accident at Hampton Beach left him a quadriplegic. He met this challenge with incredible resolve. Soon after leaving the hospital, he began to study at the University of Lowell, and he then ventured to Arizona State University where he earned a Bachelor’s Degree in Business Administration. Mr. Sullivan returned to his hometown of Hudson upon graduation in 1987 and began working at Digital Electronics Corporation. Jim soon realized, however, that his true calling was to serve the school district and hometown that he loved so much. He began to volunteer as an assistant track coach at Alvirne, and he also offered invaluable assistance to the vocational, media, computer and music programs at his alma mater. Mr. Sullivan was elected to the Hudson school board, and he ultimately earned a position as the board’s president. Mr. Sullivan was also very much involved in N.H. Independent living and was instrumental in ADA standard implementation throughout the state. The impact Mr.Sullivan has made on his community will continue to be felt for many years to come. Sullivan’s legacy will live on through his parents, Charles and Constance Sullivan of Hudson N.H. ; two sisters, Laura Larson of Manchester N.H. and Teresa Kelly of Fayetteville, Georgia; three brothers, Charles, Jr. of Grosse Point Woods, Michigan, Timothy of Derry N.H., and William of Honolulu, Hawaii; fourteen nieces and nephews, numerous aunts, uncles and cousins, and countless friends. Visiting Hours will be held on Mon. Feb. 22nd from 4pm – 8pm in THE DUMONT-SULLIVAN FUNERAL HOME, 50 FERRY ST. IN HUDSON. A Funeral Mass will be celebrated on Tues. Feb. 23rd at 10am in St. Kathryn’s Church, 4 Dracut Rd., in Hudson. All May Meet At Church. Burial will be in Holy Cross Cemetery in Hudson. In lieu of flowers the family encourages donations be made in James’ loving memory to the James Sullivan Scholarship Fund c/o Citizens Bank, 71 Lowell Rd., Hudson, NH 03051.

James Augustine Sullivan of Hudson died on Ash Wednesday Feb.17, 2010 having faced his most recent challenge of cancer with the same courage, grace and dignity that has characterized his entire life. He passed with friends and family by his... View Obituary & Service Information

The family of James A. Sullivan created this Life Tributes page to make it easy to share your memories.