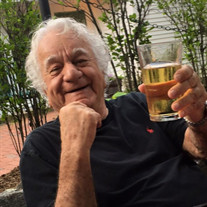 James K. Stellos, 87, a lifelong Nashua resident, businessman, philanthropist and, most importantly, family man, died after brief period of declining health on Sunday, January 20, 2019 at Massachusetts General Hospital. Jimmy was born in Nashua, N.H. on December 7, 1931 and was the son of Greek immigrants, Kleanthis D. Stellos and Anna Loukides Stellos. Jimmy leaves behind his wife of 58 years, Sandra (Downing) Stellos. In addition to his beloved wife, Jimmy leaves three daughters, Cassandra Stellos-Malvers and her husband Dennis Malvers, Melanie Stellos Colorusso, and Alyson Stellos-Hartsock and her husband David Hartsock. He also leaves his adored grandchildren, James, Michael, Demetri, Maxwell, Effie and Madeline. In addition to his parents, he was predeceased by his brother, Nicholas Stellos and his sister, Harriet Stellos Maldini. Jimmy Stellos was a leader in the Nashua community for more than fifty years. He lent his financial support and the benefit of his knowledge and expertise to many Nashua area organizations and charities. He was a member of the Nashua LIONS Club for more than 50 years. He was one of the founders of the Nashua Charitable Foundation and served on the Board of Directors of the Nashua Trust Company. Jimmy served Nashua’s Boys & Girls Club as a board member of its Charitable Foundation. Jimmy’s greatest voluntary contributions were to his church community. He had a lifetime of service beginning at the age of 21 when he was first elected to the Parish Council and served as the community’s President. His dedication to the church earned him the 1999 Diocesan Award. Jimmy also served on the Board of Trustees of the Hellenic College and Holy Cross School of Theology in Brookline, Massachusetts. He served as a member of the Board’s Executive Committee and as Chairman of the Finance and Development Committee. Sports were a real passion for Jimmy. He was especially interested in bringing the opportunity to be involved in sports to the youth of Nashua. In the 1970’s he sponsored a Pop Warner Football team called the Stellos Volts. In 2001, he made a more permanent contribution to the sports scene for Nashua’s youth. Jimmy made a major contribution to the rectangular sports stadium, which the city named for him. Stellos Stadium will be a place for the children of Nashua to play for generations to come. Jimmy was especially proud to be a Red Sox season ticket holder for 50 years. Jimmy attended public schools in Nashua and graduated from Nashua High School in the Class of 1952. After serving in the United States Army, he returned to Nashua to build his business. Stellos Electric was founded in 1954 and Jimmy remained as President until his death. He expanded his business interests in the early 1980’s when he and partner, Gerry Nash, founded WNDS TV-50 in Derry, NH. Jimmy was a humble, loving and generous man who will be remembered by many for his philanthropy and his business successes. Jimmy had friends all over the city of Nashua and points beyond. Each of them will miss him but none as profoundly as his family. Above all, Jimmy loved his family and his time with them immensely. He loved the time he spent with Sandra as they traveled to Aruba each winter for more than 30 years. He loved his weekend trips to Foxwoods where he enjoyed friendship, good wine and games of chance. He loved his summers on Lake Winnipesaukee. He was driving boats and jet skis around the lake well into his 80s. He loved good meals and conversations with family and friends, whether it was on his deck or at his favorite watering hole, The Mug. Jimmy was a devoted father and grandfather. He adored his daughters and grandchildren. He offered his advice and his love freely and in great measure. He was deeply admired, respected and loved in return. The lessons and love “Armpie” shared will resonate in each of them for a lifetime. He passed from this world surrounded by his family and their love. Visiting hours will be held on Thursday, January 24th from 4pm - 8pm in St. Philip Greek Orthodox Church, 500 West Hollis St. in Nashua. A funeral service will take place on Friday, January 25th at 10am in the church. Burial will take place in Woodlawn Cemetery, Nashua. The family encourages you to respect Jimmy’s wishes and in lieu of flowers make a charitable donation to St. Philip Greek Orthodox Church, 500 West Hollis St., Nashua, NH 03062 or online at http://stphilipnh.org/stewardship/

The family of James K. Stellos created this Life Tributes page to make it easy to share your memories.