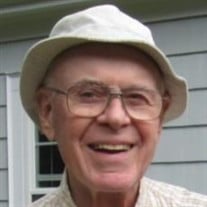 James (Jim) Ryder of Nashua, NH entered into eternal life on April 19, 2020 at his home surrounded by family. He was born on May 30, 1933 in Pawtucket, RI, son of the late John Patrick and Virginia Loretta (Nadeau) Ryder. He was predeceased by his brothers, Austin, and Bernard Ryder. Jim was the Exec. Dir. of Rochester, NY Assn. for the Blind, 1965-71; Exec. Dir. of Pressley Ridge Sch., Pgh., PA, 1971-75; Exec. Dir. Mass. Assn. for the Blind, Brookline, MA, 1975-80; Treas., RZR Inc., MA, 1980-2015; Partner, Ryder, Zimmerman & Ryder, 1979-2016; Pres., RZR of NH Inc., 1985-2015; Pres., RZR Co/RZR Hardware, ME, 1987 to 2017. He received the Newell Perry Award, Natl Fed of the Blind, 1980 and served on the Mass Bd of Library Commrs., 1978-83. After graduating from St. Raphael’s Academy in 1951, Maryknoll College in 1955, and serving in the US Army in Germany for two years, Jim married Rosaria Pagano in 1957. He has an M.S.W., Boston College, 1959 and an M.B.A., Univ. of Rochester, 1971. Over their 62-year marriage, Jim & Ro lived in Dorchester, MA; Scotia, Owego and Rochester, NY; Pittsburgh, PA; Concord, MA; Jefferson, ME; and Nashua, NH. In each place, Jim touched the lives of many, always wanting to help people reach their full potential despite any limitations they may have. He had a great sense of humor, a strong faith, a great love for his family, valued his independence, liked to play tennis, and take long walks. One of his favorite sayings was “Problems are always opportunities”. Jim will be dearly missed by his wife, Rosaria (Pagano) Ryder; his children Patricia Ryder Waggoner and her husband Kevin, Steven James Ryder and his wife Lucy, Kathleen (Ryder) Cogswell and her husband Fred, Michael Ryder, Jeanne (Ryder) McBrien and her husband Mike, Cynthia Ryder; seven grandchildren; one great-grandchild; several nieces and nephews; several grandnieces and nephews; and their beloved business partner of forty years, Ruth Zimmerman. A private service will be held in the DUMONT-SULLIVAN FUNERAL HOME IN HUDSON, NH with interment to follow in Holy Cross Cemetery in Hudson, NH.

James (Jim) Ryder of Nashua, NH entered into eternal life on April 19, 2020 at his home surrounded by family. He was born on May 30, 1933 in Pawtucket, RI, son of the late John Patrick and Virginia Loretta (Nadeau) Ryder. He was predeceased... View Obituary & Service Information

The family of James E. Ryder created this Life Tributes page to make it easy to share your memories.