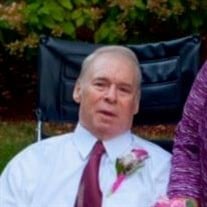 James Stanley Plotnik, 72, passed away peacefully on November 8, 2018 at Hanover Hill Health Care Center in Manchester, NH after a long illness. He was born May 5, 1946 to Martha (Rolnick) and Maxwell Plotnik in Schenectady, NY. He graduated from Mont Pleasant High School and Union College, both in Schenectady, NY. He was married to Linda (Piotrowski) for 50 years, with whom he raised three children, Lisa, Aaron and Jennifer. Jim was employed by the Visiting Nurse Association of Albany. While in Schenectady, he was an avid tennis and racquetball player. He and his friends helped to grow the Schenectady Pickleball community and brought pickleball to the New York Senior Games. He was the USAPA Eastern Seaboard Ambassador. He also was very active in the Church of St Gabriel’s Men’s Club, including being elected Club President. He was also a member of the Litchfield Lions Club. In 2007 he completed his conversion to Catholicism and was baptized. He was also an avid Union College hockey fan, attending many home games. He and his wife Linda moved to New Hampshire in August 2008 to be closer to their children and grandchildren. They resided in Litchfield. Jim brought pickleball to NH and was able to teach enough people in NH to play pickleball such that 2 large clubs in southern NH were born and continue to grow. He and Linda also traveled with Lisa to see Union College hockey games in Boston and Hanover, to support his team. He is survived by his loving wife, Linda of Auburn, NH; his daughter Lisa Plotnik of Auburn, NH, a son Aaron Plotnik and his partner Rumi of Concord, MA, a daughter Jennifer DiCesare and her husband Joe of Dunstable, MA and grandchildren Andrew and Lauren DiCesare, Max and Rebecca Plotnik. His sister Sandra (husband Rodney) Paley resides in New Jersey. He has 5 nieces and nephews in New York and New Jersey. The Plotnik family would like to thank all of the staff and families at Hanover Hill who embraced our family and made Jim’s time at Hanover Hill filled with love, joy and jokes. Jim’s sense of humor was apparent many days during his time at Hanover Hill. Additionally the staff from Compassionate Care Hospice provided exceptional care for Jim and love and support to the entire family, especially during the difficult times. Visiting hours will be held on Monday, November 12th from 2-4pm in the DUMONT-SULLIVAN FUNERAL HOME, 50 FERRY ST., IN HUDSON, NH. A Mass of Christian Burial will take place on Tuesday, November 13th at 10am in St. Francis of Assisi Church, 9 St. Francis Way, Litchfield, NH. Burial will follow in St. Patrick Cemetery in Hudson. In lieu of flowers, donations may be sent to Compassionate Care Hospice Foundation, Inc., 18 Orchard View Drive Unit 4, Londonderry, NH 03053.

James Stanley Plotnik, 72, passed away peacefully on November 8, 2018 at Hanover Hill Health Care Center in Manchester, NH after a long illness. He was born May 5, 1946 to Martha (Rolnick) and Maxwell Plotnik in Schenectady, NY. He graduated... View Obituary & Service Information

The family of James S. Plotnik created this Life Tributes page to make it easy to share your memories.