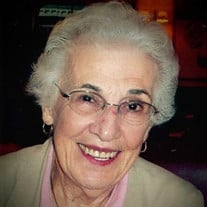 Jacqueline Louise (Malhoit) Yarmo, age 90, of Hudson, NH, died peacefully in her home on Sunday, October 16, 2016, surrounded by her family. She was born in Nashua, NH on August 13th, 1926 and was the loving wife of the late John Stanley Yarmo. Jackie was a lifelong resident of Hudson, NH and was a 1944 graduate of Nashua High School. As a teenager, she worked as a waitress at the Rosebud restaurant and later was employed at Nashua Corporation, also known as the “Card Shop”. Under the tutelage of her sister-in-law, Stacia Fontaine, Jackie went on to become a skilled seamstress specializing in home decor. She had her own custom drapery and slipcover business for over twenty years before expanding into interior design and owning a Decorating Den business. After retiring from decorating, Jackie enjoyed working at the City of Nashua Fire Department for many years. Jackie was a sports enthusiast and played in a women’s basketball league in the late 1940’s and early 1950’s. She took great pride in her home and enjoyed attending her sons’ sporting events and her daughter’s dance recitals. She and her husband John enjoyed hosting parties for their friends and taking square dancing lessons. Later in life, Jackie travelled and enjoyed outings with the local senior groups. She loved going to the Nashua YMCA to stay fit and cherished her friendship with the “Y Girls”. She also loved playing cards and talking walks with her neighbors, whose friendships were of the most dear to hear in the last decade of her life. Jackie was passionate about serving others and was a dedicated volunteer at the Nashua Soup Kitchen for over 20 years. She also enjoyed her work volunteering at the Southern NH Medical Center and their 55 Plus Program. She could always be found helping those less fortunate throughout her life. Jackie was a doting grandmother to thirteen beautiful grandchildren that she adored, as well as eleven great-grandchildren. She is also survived by her son Paul and his wife Debra Yarmo of Hudson, NH; son Robert Yarmo and his wife Mary Sanford of Pelham, NH; son John Yarmo and his wife Barbara Michaud of Candia, NH; and daughter Jacqueline Yarmo and her husband Charlie Gray of Verona, NJ. She was also well-loved and a favorite aunt of many nieces and nephews. Visiting hours will be held on Sunday, October 23rd from 12:00 - 2:30 pm followed by a Service of Remembrance from 2:30 - 3:00 pm at the DUMONT-SULLIVAN FUNERAL HOME, 50 FERRY ST., IN HUDSON. In lieu of flowers, memorial donations in Jackie’s name may be made to the Nashua Soup Kitchen and Shelter, PO Box 3116, Nashua, NH 03061-3116 or online at www.NSKS.org.

Jacqueline Louise (Malhoit) Yarmo, age 90, of Hudson, NH, died peacefully in her home on Sunday, October 16, 2016, surrounded by her family. She was born in Nashua, NH on August 13th, 1926 and was the loving wife of the late John Stanley Yarmo.... View Obituary & Service Information

The family of Jacqueline Louise Yarmo created this Life Tributes page to make it easy to share your memories.