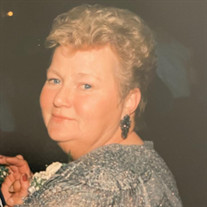 Jacqueline J. “Jackie” (Gagnon) Champagne, 78 of Hudson, NH passed away comfortably on Wednesday, September 29th at Fairview Senior Living with her daughter, Denise by her side.  Jackie battled multiple chronic illnesses for many years and is finally at peace in her eternal resting place.  Jackie was born in Lowell, MA on June 27, 1943, daughter of the late Armand and Jeanne (Labbe) Gagnon. Jackie met Gill when she was 17 and always said it was love at first sight.  She told her friends when she saw Gill that “I’m going to marry that man someday.” They dated for 3 years, broke up for 3 years, and later reunited to marry on July 27, 1968 (Gill’s birthday, so he would never forget their anniversary)!  Jackie was a homemaker and also a bookkeeper for Gill Champagne Drywall, Inc for 20 plus years.  In her later years, after children were grown, Jackie decided to have some fun jobs like working at the former Jennifer’s Cheesecakes and also at Sam’s Club as a demo lady for many years.  In Arizona, she drove her golf cart at 5:30 in the morning to volunteer as a cashier in the cafeteria at Banner Boswell Medical Center for several years, a place that would later take good care of her. Jackie loved to play BINGO and frequented the former Holt’s Hall in Hudson. She also loved to travel and enjoyed her cruises to the Bahamas with her girlfriends, gambling in Vegas with Kathy, cruises to the Caribbean and Alaska with her husband and close friends. She also enjoyed several trips out west to snowmobile in Yellowstone with Gill.  But most of all, she enjoyed snow-birding in Arizona with her beloved husband over the last 25 plus years. Driving around town and going grocery shopping at Fry’s in her golf cart was her favorite pastime. Jackie loved spending time with her family and grandchildren.  She also loved to eat Chinese Food, chicken wings, seafood, taking rides to the beach, playing solitaire games on the iPad, and watching game shows on TV like Wheel of Fortune and Jeopardy. She also loved playing Skipbo with her husband, whom she thought cheated because he won so often.  Most recently, she truly enjoyed watching Heartland on Netflix- especially when she had trouble sleeping.  We will all treasure the family Christmas spent in Arizona in 2019 with all her children, their spouses, and her grandchildren.  Jackie was a friend to everyone especially her lifelong friend Connie, and her friends Clemence, Mary, and Annette; also, her friend Mariette, who she enjoyed working with at Hudson Monuments.  Jackie also had many close friends in Arizona including her neighbors Joanie and Bob, Carlos, Victoria and family, Joe and Mario.  She treasured her family friend Pauline who shared time with her in her last days.  Jackie never had a bad word to say about anyone.  She was kind, loving, and loyal. She was always supportive of her children’s aspirations and loved her children and grandchildren.   She was the most selfless person and will be very deeply missed.  She is survived by her loving husband Gill, with whom she celebrated 53 years of marriage this past July, and their beloved dog Lucy; their oldest daughter, Lisa and husband Andy Koval of St. Albans, VT and their children Andrew, Dylan and Jillian; oldest son Robert “Bobby” of Hudson and his children Madison and Jacob; daughter Denise and her husband Roger of Hudson and his children Justin and Chantel; and son Danny of Nashua. She was the sister of the late Richard Gagnon and his wife Carol Gagnon, their two children, Michael (wife Lisa) and Phyllis Gagnon who recently passed away in July; sister to Ronald Gagnon and his wife Janet and their three children, Tammy Gazda (husband Matt), Derek Gagnon (wife Tammy) and Stephen Gagnon (wife Stephanie); Sisters Arlene Bozek of Florida and Susan Broom of California as well as many close nieces, nephews, and cousins. Visiting hours will be held on Friday, October 8th from 3pm - 7pm in the Dumont-Sullivan Funeral Home, 50 Ferry St., in Hudson. A Mass of Christian Burial will take place on Saturday, October 9th at 10am is St. Kathryn Church, 4 Dracut Road in Hudson. All are asked to please meet at church. Burial will take place in the Champagne Cemetery in Hudson. Face masks and / or facial coverings are optional while attending indoor services.

The family of Jacqueline "Jackie" Champagne created this Life Tributes page to make it easy to share your memories.