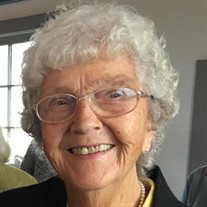 Jacqueline Laura (Ricard) Dionne, 85, of Hudson, NH, peacefully passed away Saturday, November 12, 2016 at the Hyder Hospice House in Dover, NH, surrounded by her loving family.   She was born December 28, 1930 in Nashua, NH, daughter of the late Joseph and Modeste (Sirois) Ricard. Jackie was also predeceased by a son, Richard A. Dionne, as well as by a sister, Ruth Millette and two brothers, Donald Ricard and Robert Ricard.   Jackie was the loving wife of Richard “Dick” Dionne of Hudson, with whom she shared 59 years of marriage.   She was a true homemaker, taking pride in cooking the tastiest meals, mending the toughest tear in a garment, and gardening the healthiest vegetables and most beautiful flowers. Sitting on the back yard swing with her husband was what brought a smile to her face. Her family was her pride and joy and she adored her grandchildren and loved spending time with them.   Besides her loving husband Richard, her loving, devoted family includes a daughter, Kathleen M. Regan and her husband F. Keith of Windham, two sons, Scott R. Dionne and his wife Marlene of Nashua, Duane M. Dionne and his wife Jennifer of Litchfield, six grandchildren, Christopher Dionne of Nashua, Amy Marie Regan and F. Clifford Regan of Windham, Natalie Y. Dionne of Nashua, Demi Dionne and Lauren Dionne of Litchfield, two sisters Annette Simard of Manchester, Doris Burt and her husband Albert of Merrimack as well as many nieces and nephews. All services will be private. It is the family’s request that if anyone is considering sending flowers to the family, that they instead make a donation in Jackie’s name to the charity of their choice.

Jacqueline Laura (Ricard) Dionne, 85, of Hudson, NH, peacefully passed away Saturday, November 12, 2016 at the Hyder Hospice House in Dover, NH, surrounded by her loving family.   She was born December 28, 1930 in Nashua, NH, daughter of the... View Obituary & Service Information

The family of Jacqueline Dionne created this Life Tributes page to make it easy to share your memories.