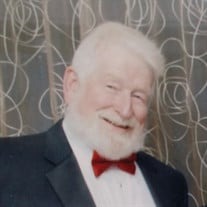 J Bradford Seabury, 83, of Hudson NH, died Monday, February 15, 2016, after a long battle with cancer. His last days were spent at Merrimack Valley Hospice, where he experienced the great pleasure of visiting relatives and friends; his final hours were spent in the company of loving family members. Brad was born in South Portland Maine in May, 1932. After graduating from Portland Jr. College, he enlisted and served 3 years in the Army. When he left the service, Brad earned his BA in English Literature and Philosophy from the University of Maine. In 1957, he married Ann McNally. They lived in Portland for a short time, then moved to Minneapolis, Minnesota where Brad worked and did graduate study at the University of Minnesota for several years. The couple eventually relocated to Hudson, New Hampshire in 1968 and settled roots. Brad worked as a Tech Writer for several local tech companies, including Sanders, Wang Laboratories, and Cabletron. He was also very involved in town civics with his wife Ann. Together they operated the Hudson Minutemen, a part-time business that recorded the minutes for several towns in the local area, but mostly Hudson. Brad was also heavily involved with Toastmasters, Portsmouth Chapter and the Hudson Seniors Center. He loved to travel and took more than 15 cruise trips with his wife Ann and their mutual friends. Brad is survived by this three children: Suellen Seabury (Hudson, NH), JP Seabury (Manchester, NH), and Stacy Paradise (Windham NH), as well as 7 grandchildren. Brad was preceded in death by his wife, Ann. While there will be no viewing or services, Brad asked that “those who might otherwise have gotten dressed up to come pay their last respects instead get dressed up, take their loved one out or go in the company of friends, and have a toast in my honor.” In lieu of flowers, the family is requesting that donations be made to either the American Cancer Society (http://donate.cancer.org) or the Merrimack Valley Hospice (http://www.homehealthfoundation.org/memorial-gifts/).

J Bradford Seabury, 83, of Hudson NH, died Monday, February 15, 2016, after a long battle with cancer. His last days were spent at Merrimack Valley Hospice, where he experienced the great pleasure of visiting relatives and friends; his final... View Obituary & Service Information

The family of J Bradford Seabury created this Life Tributes page to make it easy to share your memories.