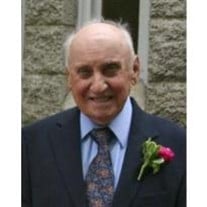 Herve C. Ricard, 84, of Hudson, New Hampshire, died February 26, 2012, in Largo, Fla. He was born March 26, 1927, Nashua, NH the son of late Ralph and Madeleine Ricard. He was predeceased by his loving wife of 23 years Therese A. (Ducharme); his oldest son Ralph; a brother Guy Ricard of Goffstown, NH., sisters Yvonne Ricard of Nashua and Yolande Thacker of Honolulu, HI. “Van” or “Harvey” was a graduate of Nashua High School class of 1947 and went on to serve in the U.S. Navy as an aviation mechanic during WWII. After his honorable discharge, he was employed by Nashua Corporation for 36 years, retiring in 1991. He was a fan of the NY Yankees and Montreal Canadiens which always made for entertaining viewing of the games with his kids who were loyal Red Sox and Bruins fans. He enjoyed his many years of ballroom dancing with his wife Therese, playing bridge, whist and cribbage. He also enjoyed spending the later years of his life with Lorraine in Largo FL during the winters where they played golf, card games and enjoyed life with numerous friends. Mr. Ricard was a member of St. John’s Catholic Church Hudson, NH. He was also a member of the Elks Club and Social Club in Nashua. He is survived by his fiancé Lorraine Higton of Pelham, NH and her loving family; daughter, Sharon Harrington; Granddaughter and Husband, Lauren and Todd Woekel and grandson, Blake all of Pelham, NH.; He is also survived by his daughter and son-in-law, Susan and Bruce Basford of Old Orchard Beach, ME; three sons and daughter-in-law, Raymond and Denise Ricard of Hudson, NH.; Robert and Heather Ricard of Hollis, NH; Ronald and Diane Ricard of Hudson, NH; daughter in law Lisa Ricard; a sister Huguette Audin of Mount Pleasant, SC; He has 5 grandsons, Raymond, Andrew, Cameron, Hayden and Ryan, 6 granddaughters, Kerry, Christine, Renee, Danielle, Amanda and Marissa as well as several great grandchildren. Visiting Hours will be held on Fri. March 2nd from 4pm-7pm in THE DUMONT-SULLIVAN FUNERAL HOME, 50 FERRY ST. IN HUDSON. A Funeral Mass will be celebrated on Sat. March 3rd at 9am at Blessed John XXIII Parish in St. John the Evangelist Church, 27 Library St., Hudson. ALL MAY MEET AT CHURCH. Burial will be in St. Louis cemetery in Nashua.

The family of Herve Ricard created this Life Tributes page to make it easy to share your memories.