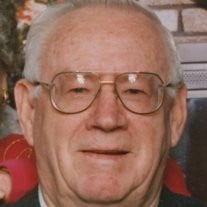 Henry “Red” Fournier, 91, a resident of the NH Veterans Home in Tilton, NH and formerly a longtime resident of Hudson, NH died on Wednesday October 23rd, 2013.   Henry was born on January 7th, 1922 in Lowell MA, son of the late Eugene and Yvonne (Daunais) Fournier.    Henry was predeceased by his wife Rita (Michaud) Fournier in 2011 after 65 years of marriage. He was also predeceased by six sisters, Rita Klaver, Doris Pereira, Cecile Gauthier, Lucy Ninteau, Irene Caron and Therese Hebert and two brothers, Roland and Emile Fournier.   Henry served his country honorably during WWII in the US Army where he achieved the rank of Sergeant and was awarded the Purple Heart.  After his honorable discharge he was employed by the US Government/Civil Service, where he worked at both Fort Devens and Hanscom Field until he retired in 1969.  After retiring, he explored several career changes and returned to work full time at Sanders Associates (BAE Systems) as a material handler where he worked until 1984.   In his retired years, he enjoyed vacationing with his wife, relatives and close friends.  He most enjoyed spending time with his children and grandchildren. Henry was a member of VFW Post 5791, American Legion Post 48, Knights of Columbus and DAV Chapter 7 in Nashua. He was one of the founders of the South Pacific Buddies Association.   Henry is survived by three sons, Robert Fournier and his wife Terry of Hudson, NH, Ronald Fournier and his wife Michele of Pembroke, NH and Roger Fournier and his fiancée Rebecca Adams of Burton, MI a daughter, Rachel Guill and her husband John of Hudson, NH; eight grandchildren; seven great-grandchildren; one sister, Pauline Beaulieu and her husband Alphonse of Dracut, MA, several nieces, nephews and many dear friends.   Visiting Hours will be held on Monday October 28th from 5-8pm in the Dumont-Sullivan Funeral Home, 50 Ferry St., Hudson. At 11am the following morning a Funeral Mass will be celebrated at Blessed John the XXIII Parish, 27 Library St., Hudson. All To Meet At Church. Burial will take place in St. Patrick’s Cemetery, Hudson. The family has requested that in lieu of flowers, donations be made to the NH Veterans Home, 139 Winter Street, Tilton, NH 03276.

The family of Henry "Red" Fournier created this Life Tributes page to make it easy to share your memories.