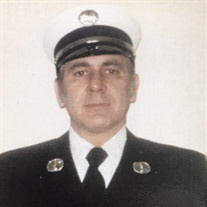 Henry E. Dussault of Hudson, NH, died January 25, 2018 at the age of 86 after a long, brave battle with multiple health issues. Henry was born in Lowell, MA on November 8, 1931, the son of Arthur and Herminia Dussault. He is survived by his loving wife, Jean, of 63 years. He will be deeply missed by his four children, Kathleen Willis and her husband, Matthew of North Andover, MA, Joanne Nebalski and her husband, Ralph of Chelmsford, MA, Susan Flaherty and her husband, Frank of Lake Worth, FL, and David Dussault and his wife, Kristen of Nantucket, MA; eight grandchildren, Lynn, Jenny, Sean, Craig, Jocelyn, Erica, Emily, and Sara; and three great-grandchildren, Michael, Liam, and Emerson. He is also survived by many nieces and nephews. He was predeceased by his sisters Rita Martineau and Irene Nelson. Henry proudly served in the Korean War as an Ensign in the U. S. Coast Guard. In 1967 he joined the Lowell Fire Department. During his career, Henry was promoted to lieutenant and in 1981 he retired due to a work related injury. While raising their four children, Henry and Jean enjoyed creating lifelong memories taking vacations that included camping on Cape Cod, spending time at Salisbury and York Beaches, and traveling. For their 50th wedding anniversary, the couple, their children, and their grandchildren enjoyed a cruise to the Caribbean. For many years, Henry and Jean enjoyed the winter months in Florida. Henry was skilled in many trades and was quick to lend a helping hand to anyone in need. He never missed an opportunity to attend his grandchildren’s activities. He was an avid Red Sox and Patriots fan and he enjoyed following the stock market. At Henry’s request, there will be no calling hours. Relatives and friends are invited to attend a Memorial Mass at Saint Kathryn Church, 4 Dracut Road, Hudson, NH. on Wednesday, January 31, 2018 at 10:00 am. In lieu of flowers, donations may be made to Food for the Poor, Inc, 6401 Lyons Road, Coconut Creek, FL 33073 or American Life League, 1179 Courthouse Road, Stafford, VA 22554. Private burial will be held at a later date.

Henry E. Dussault of Hudson, NH, died January 25, 2018 at the age of 86 after a long, brave battle with multiple health issues. Henry was born in Lowell, MA on November 8, 1931, the son of Arthur and Herminia Dussault. He is survived by his... View Obituary & Service Information

The family of Henry E Dussault created this Life Tributes page to make it easy to share your memories.