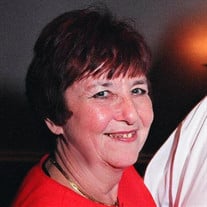 Helga Lieselotte (Blome) Reinitzer, 77, of Hudson, NH died Thursday, February 4, 2016 at the Southern NH Medical Center in Nashua. Helga was born on April 6, 1938 at home in a small Bavarian village of Oberau, Germany. She was the third child of six children born to Amalie and Emeran Blome. Helga studied and learned the trade of becoming a seamstress in the nearby town of Garmisch. This is where she met her husband of 60 years, Julius, in the summer of 1955. Helga’s interests and hobbies included sewing for her family, gardening, and cooking. She took great pride in designing the clothing she made and created many ball gowns that were worn to the numerous military balls she and her husband attended, while he was serving in the US Army for 30 years. Helga also had a green thumb and took great pride in her garden. She could identify all the flowers and plants that grew on her 4 acre property in Hudson. Helga’s home cooking and delicious cakes and meals were appreciated most of all by her husband, her family, her friends, and especially her grandchildren who often helped her bake and decorate German Christmas cookies for the holidays. She will be remembered for her loving way and for being a dedicated and loving grandmother, who assisted in raising her four dear grandchildren. Her loving family includes her husband Julius Reinitzer of Hudson, her daughters Elaine Reinitzer of Hudson and Ilona Reinitzer of Litchfield, her sons in law Paul Miller and Peter Blaser and four grandchildren; Adrian Cote, Jillian Cote, Savannah Reinitzer, and Sierra Reinitzer. Following cremation, visiting hours will be held on Tuesday, February 9th from 6pm - 8pm in the DUMONT-SULLIVAN FUNERAL HOME, 50 FERRY ST. IN HUDSON. A service of remembrance will be held on Wednesday, February 10th at 11am in the funeral home and all may arrive at 10:30am. Burial will be held privately in the NH State Veteran Cemetery in Boscawen, NH.

Helga Lieselotte (Blome) Reinitzer, 77, of Hudson, NH died Thursday, February 4, 2016 at the Southern NH Medical Center in Nashua. Helga was born on April 6, 1938 at home in a small Bavarian village of Oberau, Germany. She was the third child... View Obituary & Service Information

The family of Helga Reinitzer created this Life Tributes page to make it easy to share your memories.