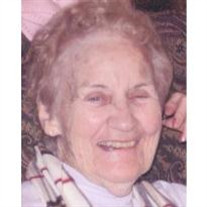 Helen Josephine Stout, 94, resident of Hudson, NH, died peacefully November 22, 2011 at the Bedford Hills Nursing Home, Bedford, NH surrounded by her loving family. She was born in Somerville, MA on September 26, 1917, the daughter of John and Elizabeth O'Leary. She was one of nine children. She was raised and educated in Somerville, MA. Jo Stout resided in Hudson, NH for over 45 years and was a communicant at St. John the Evangelist church for many years. She was an active member of the Women's Guild at St. John's. She had been employed. as a secretary of the Hudson School system for 30 plus years working at the Library Hill School, Nottingham West School and Hills Garrison School. She was much loved by the administration, teachers and children of her schools. She was predeceased by her beloved husband, Joseph F. Stout, who died in 1991. Family members include a daughter and son-in-law, Maryann and Robert Battista of Candia, NH; a son and daughter-in-law, Robert and Tricia Stout of Candia, NH; a daughter and son-in-law, Elizabeth and David Mague, of Nashua, NH. Jo was the proud grandmother of 6 grandchildren, Kate Barbadora, Lora and Sara Battista; Anthony and Colleen Mague; and Mary Stout. She also had three great-grandchildren, Emma, Maeve, and Joseph Barbadora. She is survived by three siblings, Therese Fehlan of Florida, Agnes Stier of Massachusetts, and William O'Leary of Massachusetts. Visiting hours will be held Sun. Nov. 27 from 1-4pm at the Dumont-Sullivan Funeral Home, 50 Ferry St., Hudson. There will be a private funeral Mass at St Patrick Church on Monday with private burial to follow.

The family of Helen Josephine (Jo) Stout created this Life Tributes page to make it easy to share your memories.