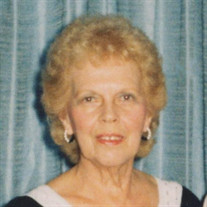 Helen O. Morin, 90, of Hudson, NH died Nov. 8, 2014 peacefully at her home in the arms of her daughter, Judith after a long illness. Helen was born on July 20, 1924 and graduated Nashua H.S. in 1942. She married Fernand J. Morin in 1948 and was married for 65 years. Fern predeceased her on November 18, 2013 and she was also predeceased by 6 brothers and a sister. Helen is survived by a daughter, Judith Morin Russell, of Hudson, NH; a brother, Rollin Jr. of Nashua, a sister in law Claire Beausoleil of Goffstown, NH, and several nieces and nephews. Helen worked for many years at RDF Corp. of Hudson. She was an active member of The Church of the Good Shepherd Episcopalian denomination for many years, also teaching Sunday School with Fern. She enjoyed dancing, in her younger years, along with knitting, crocheting, card playing, painting by numbers and watching Dancing With the Stars. She also enjoyed traveling with Fern, friends and the Nashua Seniors. Visiting Hours will be held on Wednesday November 12, 2014 from 6-8pm at the Dumont-Sullivan Funeral Home, 50 Ferry St., Hudson. A Funeral Service will be held the following morning at 11am in The Church of the Good Shepherd, 214 Main Street, Nashua, NH. Public may begin to arrive at 10:30am.

The family of Helen O. Morin created this Life Tributes page to make it easy to share your memories.