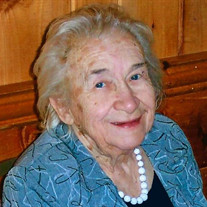 Helen (Paton) Beaudin, age 91, died at St. Joseph's Hospital on March 17th after a brief illness.  She was born on May 27th, 1923 in Merrimack, NH and shortly after moved and resided in Nashua, NH most of her life.  She worked for 19 years at "The Card Shop" in Nashua which she greatly enjoyed and where she met her late husband Wilfred (Koko) Beaudin. She also worked for Teledyne Technologies as a quality control inspector for several years when it was in Nashua.  Helen and her husband had a weekend/vacation home on Island Pond in Stoddard, NH and eventually made it their permanent home after retirement.  Helen also resided for a brief time in Deering, NH caring for her brother and sister, then moved to Surry, NH for several years before returning to Nashua in 2005 where she spent the remainder of her years.  Helen enjoyed crafting, especially quilting, knitting and crocheting.  She kept  her family supplied with warm crocheted slippers for many, many years.  She had a great compassion for all animals and especially cats who were her constant companions throughout the years.  She also enjoyed listening to music from her younger years and was especially fond of Johnny Mathis and was a longtime member of his fan club. During her final years she resided at the AHEPA 35 Manor in Nashua where she enjoyed many community activities with her AHEPA "family"  Helen  made many friends at AHEPA  and was loved by all.  She had a great love for her family and always enjoyed attending family gatherings.  She had a very strong will and maintained her independence until her final days.   She will be greatly missed and fondly remembered by all who knew her. She was predeceased by  her husband, Wilfred (Koko) Beaudin, parents, Emma (Martel) and Frank Paton also five brothers; Harold, Walter, Francis, William and Lester Paton, and one sister, Dorothy Paton. She is survived by a niece; Katherine Gagne of Nashua, NH;  one Nephew;  James Paton and wife Beth of Tennessee.  Also several  great, nieces and nephews.  A time of visitation will be held on Saturday, March 21st in the DUMONT-SULLIVAN FUNERAL HOME, 50 FERRY ST. IN HUDSON from 4pm - 5:30pm. A Prayer service will take place at 5:30pm in the funeral home. Following cremation, she will be laid to rest with her beloved husband Wilfred (Koko) and cat Angela Mia at the New Town Cemetery in Stoddard, NH.

Helen (Paton) Beaudin, age 91, died at St. Joseph's Hospital on March 17th after a brief illness.  She was born on May 27th, 1923 in Merrimack, NH and shortly after moved and resided in Nashua, NH most of her life.  She worked for 19 years... View Obituary & Service Information

The family of Helen Beaudin created this Life Tributes page to make it easy to share your memories.