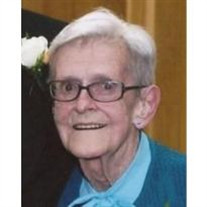 Helen E. (Carney) Paladino, 84 of Nashua, passed away peacefully at Greenbriar Terrace Health Facility with members of her cherished family by her side on Wednesday March 16, 2011. Helen was born in Utica, NY on September 11th in 1926. She was the daughter of the late William and Helen (Dorsey) Carney. She attended local Catholic Schools in Utica and graduated from Excelsior School of Business in Utica. In her early years, Helen worked at Oneida National Bank in the Consumer Loan Department. In 1957, Helen married Joseph Paladino at St. Francis de Sales Church in Utica. Joe & Helen welcomed their first son, James in 1959 and second child, Peter in 1963. In 1964, Joe, Helen and their children relocated to Nashua for Joe’s employment with the Federal Government. After raising her sons, Helen returned to the workforce working in the cafeteria at Bishop Guertin H. S. briefly and later at Nashua Trust where she remained employed until her retirement in the late 1980’s. Helen was a woman devout in the Roman Catholic faith as she and Joe attended daily mass at St. Patrick, Immaculate Conception, Bishop Guertin and Rivier College until her brief illness. In addition to her faith, Helen was very generous as she donated to numerous charitable organizations both locally and nationally. Helen enjoyed cooking & hosting her family for holiday dinners, viewing television, various crossword and word-seek puzzles and reading the daily comic strips, particularly Peanuts and the Snoopy and Charlie Brown characters. Helen is survived by her loving husband Joe, with whom she celebrated over 53 years of marriage, her sons Jim, his wife Marianne and their children Matthew, Andrew and Melissa, Andrew’s new bride, Katie and Helen’s other son Peter. She also has nieces in California, Joanne Puleo, Roseanne Shafer, Gina Ebling and their husbands, children and grandchildren, in New York, a niece Patricia Ninney and her children and a nephew in Hawaii, Timothy Carney. Helen’s two brothers, William and Francis Carney preceded her in death. The Paladino family wishes to thank the very caring and compassionate nurses, doctors of the Southern New Hampshire Medical Center and Greenbriar Terrace Health Facility for their excellent and comforting care over the past few months. Visiting Hours will be held on Sunday, March 20th from 3pm -7pm in THE DUMONT-SULLIVAN FUNERAL HOME, 50 FERRY ST (Rte 111) IN HUDSON. The Mass of Christian Burial will be held at 10am on Mon. March 21st in St. Patrick Church, 29 Spring St. in Nashua, followed by interment at St. Patrick Cemetery in Hudson.

Helen E. (Carney) Paladino, 84 of Nashua, passed away peacefully at Greenbriar Terrace Health Facility with members of her cherished family by her side on Wednesday March 16, 2011. Helen was born in Utica, NY on September 11th in 1926.... View Obituary & Service Information

The family of Helen (Carney) Paladino created this Life Tributes page to make it easy to share your memories.