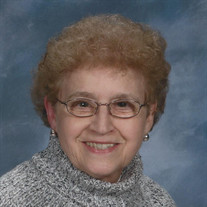 Gloria (LaChance) Bouffard, 83, passed away unexpectedly on August 5, 2018 at her home in Hudson, NH. Gloria was born on April 19, 1935 in St. Johnsbury, VT. She was the daughter of the late Lucienne and Raymond LaChance. Gloria was predeceased by 4 brothers, Raymond LaChance, Paul LaChance, Herbert LaChance and Maurice LaChance. Gloria was the loving wife of George Bouffard, of Hudson NH who passed away in 2007. They shared 45 years of marriage together.   Gloria was employed by Verizon. Her career started as a switchboard operator then evolved to a telephone repair clerk until her retirement in 1998. Gloria had many interests. Her favorite pastime was baking and cooking. Her other hobbies included reading novels, knitting, needlepointing, quilting, photography, and going on trips with her friends and adventures around the world with her husband, George. Gloria was also an excellent hostess, and enjoyed hosting many holiday parties at her house. She was a wonderful person who left an impact on everyone she met with her nurturing and thoughtful spirit. Gloria’s family meant the world to her, and spending time with her family was what she truly loved most of all.   Gloria is survived by three daughters and two sons-in-law, Jacqueline Bouffard of Hudson, NH,  Monique Dion and husband Louis of Hudson, NH, Marie Soucy and husband Scott of Nashua; five grandchildren, Nicole Dion, Jessica Dion, and Matthew Dion of Hudson, NH and Lauren Soucy and Kylie Soucy of Nashua, NH; A brother, Richard LaChance of Cocoa, FL and several nieces and nephews.   Visiting hours will be held on Monday, August 13, 2018 from 4:00 - 7:00 pm in the DUMONT-SULLIVAN Funeral Home, 50 Ferry Street in Hudson, NH.  A Funeral Mass will be celebrated the following morning at 10:00 am in St. John XXIII Parish at St. John the Evangelist Church at 27 Library Street, Hudson, NH.

Gloria (LaChance) Bouffard, 83, passed away unexpectedly on August 5, 2018 at her home in Hudson, NH. Gloria was born on April 19, 1935 in St. Johnsbury, VT. She was the daughter of the late Lucienne and Raymond LaChance. Gloria was predeceased... View Obituary & Service Information

The family of Gloria Bouffard created this Life Tributes page to make it easy to share your memories.