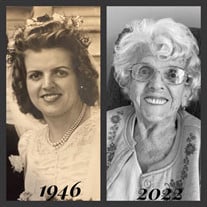 Gertrude A. (Levesque) Jalbert, 99, known as Gert to her friends, died peacefully May 31st after a short period of declining health. She was born in Hudson, NH on October 22, 1922, daughter of the late Etienne and Cleance (Belanger) Levesque. She grew up on the Pelham Road family farm in Hudson, NH and was a Nashua High graduate of the Class of 1941. She was the beloved wife of George Jalbert whom predeceased her in 1981. She was predeceased by her infant daughter Carol, six sisters Laurette Lague, Cecile Gamache, Jeanette Bibeau, Rita Bois, Theresa & Madeline Levesque, and five brothers Etienne, Robert, Roland, Emile & Lionel Levesque. In her early years, she was a supervisor at RDF Corp in Hudson and worked there for 26 years. She was always fond of her flowers and gardening as well as knitting and crafts. She loved to volunteer and teach her knitting at the Senior Center of Nashua, Hudson, and Londonderry. She also volunteered at the Fairview Nursing Home in Hudson and Langdon Place in Nashua. She was awarded the Nashua Volunteer of the Year by RSVP in 2006. She was a member of the VFW Post 483 Auxiliary for many years. In her later years, she enjoyed watching game shows, the Red Sox and playing card games with friends at the Coliseum. She is survived by two granddaughters and grandson sons-in-law, Leann and Ron Tousignant of Hollis, and Heather and Patrick Bolduc of Gilmanton, NH, four great grandchildren, Emilie and Jarrett Tousignant of Hollis and Noah and Ariana Bolduc of Gilmanton, NH, a special niece Celeste Diamantini and several nieces, nephews, and great-grand nieces and nephews as well as her special friends Jean Devito and Eileen Raymond. She lived a long full life and will be missed by all who love her. Following cremation, burial will be private. A Mass will be celebrated in her memory 8AM on Saturday, August 6th in the Parish of the Resurrection, 449 Broad St. in Nashua. All may meet at the church.

Gertrude A. (Levesque) Jalbert, 99, known as Gert to her friends, died peacefully May 31st after a short period of declining health. She was born in Hudson, NH on October 22, 1922, daughter of the late Etienne and Cleance (Belanger) Levesque.... View Obituary & Service Information

The family of Gertrude Jalbert created this Life Tributes page to make it easy to share your memories.