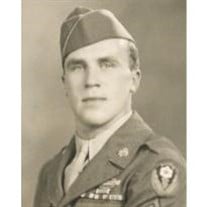 Gerard “Jerry” L. Viens, 89, a long time resident of Hudson, NH died Sunday February 19, 2012 at the Hunt Community in Nashua. Mr. Viens was born November 12, 1922 in Quebec, Canada, son of the late Adelard and Levanie (Melancon) Viens. He was predeceased by his wife, Medora (Lefebvre) Viens in 1989. Jerry moved to Hudson at a young age and worked on his uncle’s farm. He enlisted in the US Army and served for 3 years as a rifleman and sergeant in France during World War II. He was awarded the Purple Heart for his service at the Battle of the Bulge. After the war, he owned and operated a dairy farm in Hudson, was a forklift operator for Anheuser Busch in Merrimack for 20 years, and worked for the Hudson Public Works Dept. He loved his black pug Susie and enjoyed his John Deere tractor, working on his house, his garage, the lawn, and talking with his friends at his favorite diner. Jerry was a member of the Military Order of the Purple Heart, the Catholic War Veterans Post 1749, the Disabled American Veterans, and the American Legion Post 48 Hudson. He was a longtime parishioner of St. Kathryn’s Church in Hudson. He is survived by his 2 sons Leonard Viens and his wife Jill Sieveking of Manchester, Normand Viens and his wife Linda Govone of Framingham, MA, his brothers Tony Viens, Maurice Viens and his wife Carol all of NH, sisters in law Rita Viens and Priscilla Viens, both of Hudson and Winnie Viens of Staten Island, NY, as well as many nieces, nephews, and cousins. Also, his dear friend Dolores Foley of Arizona. Visiting Hours will be held on Thursday February 23rd from 4pm – 7pm in THE DUMONT-SULLIVAN FUNERAL HOME, 50 FERRY ST. IN HUDSON. A funeral mass will be celebrated on Friday February 24th at 10:30am in St. Kathryn’s Church, 4 Dracut Rd., in Hudson. ALL MAY MEET AT CHURCH. Burial will be will be in St. Francis Cemetery in Nashua.

The family of Gerard "Jerry" L. Viens created this Life Tributes page to make it easy to share your memories.