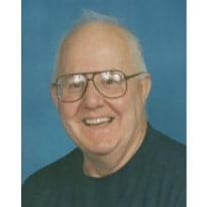 Gerald D. Lavoie, 76 of Hudson, NH died surrounded by his loving family on Saturday October 2, 2010, following a lengthy illness at the Community Hospice House in Merrimack. He was born June 27, 1934 in Webster, ME, son of the late Albert and Armandine (Bois) Lavoie. He was also predeceased by 7 brothers and sisters. Gerald was the loving husband of Frances (Peterman) Lavoie of Hudson with whom he shared 50 years of marriage. He was a graduate of Nashua High School Class of 1952 and enlisted in the United States Marine Corps in 1953. Gerald ended his active duty status in 1956, being honorably discharged with the rank of Sergeant. He gained employment with ACME Supermarkets in Delaware and married Frances, the love of his life, in June 1960. In the late 60’s they moved to Hudson, NH and resided there ever since. Gerald owned and operated Lavoie’s Deli in Nashua until retirement 1983 and later held various jobs at several local markets. He was a proud member of the Tabernacle Baptist Church in Hudson for 28 years. He was the church’s business manager for eight years, a position he held until 2005 when he decided to leave in order to focus on Frances failing health. Besides his loving wife survivors include a son and a daughter in law, Marcel and Linda “Alice” Lavoie of Sanford, ME; a daughter and a son in law, Connie and Mike Barton of Nashua; 6 Grandchildren, Shannon Lavoie, Holly Paquin, Denise Paquin, Allison Paquin, Kristie Provencher, David Provencher. As well as several nieces, nephews, and cousins. Viewing Hours will be held on Tues. Oct. 5th from 5pm -7pm in the DUMONT-SULLIVAN FUNERAL HOME, 50 FERRY ST., IN HUDSON. A Funeral Service will be held on Wed. Oct. 6th at 10am in Tabernacle Baptist Church, 242 Derry Rd., Litchfield, NH. ALL MAY MEET AT CHURCH. Burial will be held in Woodlawn Cemetery, Nashua. In lieu of flowers the family encourages donations be made in Gerald’s loving memory to Home Health & Hospice Care, Community Hospice House Attn: Development, 22 Prospect St., Nashua, NH 03060.

Gerald D. Lavoie, 76 of Hudson, NH died surrounded by his loving family on Saturday October 2, 2010, following a lengthy illness at the Community Hospice House in Merrimack. He was born June 27, 1934 in Webster, ME, son of the late Albert... View Obituary & Service Information

The family of Gerald D. Lavoie created this Life Tributes page to make it easy to share your memories.